This article is part of our NBA Observations series.

Beginning of a series where I look at some of the NBA's most intriguing squads.

The Kings entered the 2022 offseason needing a revamp. Building around Domantas Sabonis for his first full season in Sacramento was the mission. It started with hiring new coach Mike Brown, was followed by the draft selection of Keegan Murray and concluded with the acquisition of Kevin Huerter and the signing of Malik Monk. With those major moves in mind, let's dive into the success Sacramento is having:

Preseason, I still had doubts about De'Aaron Fox's ability to lead a team (he entered 2022-23 as a career 32.0% shooter from deep, coming off a lowly 2.0 AST/TO ratio the season prior). I also questioned how effective Kevin Huerter and Davion Mitchell would be.

Fox is blossoming into a true superstar. His 52.6/39.4/82.3% shooting slash is a huge leap in efficiency. The Kings are earning a league-best 1.371 points per possession when getting to the rim this season. High-quality looks equate to success. The Kings reach the rim 11th most in the league. Fox anchors these metrics, ranking 14th in the league in drives per game (14.2). The duo of Fox and Sabonis is performing well-above average in Sabonis screening actions (via NBA.com):

Huerter is also booming to a career-best season. Hitting 45.6% of 7.2 3PT per game and bringing sparkplug energy. Sacramento's qualifying lineups hold a plus-5.1 point differential with Huerter. His addition has been perfect.

Mitchell has struggled and is relegated to a smaller role, but he's still a plus defender. Despite being undersized, Mitchell is among the most under-appreciated defenders in the league.

Circling back to Murray, he's graded as a neutral contributor overall, but he brings gravity and two-way effort. Concerning metrics to monitor for Murray include (via CleaningTheGlass):

The turnovers are subpar for a player not generating assists or self-creating often. In regard to his shooting from the corners, I'm interpreting this as Murray being due for improvement. He's been in a major cold spell from three. For being a fluid athlete, Murray's steal rate is really low. Ditto for his rim finishing, and it's not for a lack of trying. He's attempting 28% of his shots at the rim -- a respectable percentage for an outside-in forward. Also, per Synergy, Murray is spending 23.0% of his possessions in transition, but he ranks among the worst transition scorers in the league. Among qualifiers, his 0.660 PPP is below everybody except Cade Cunningham (!!): 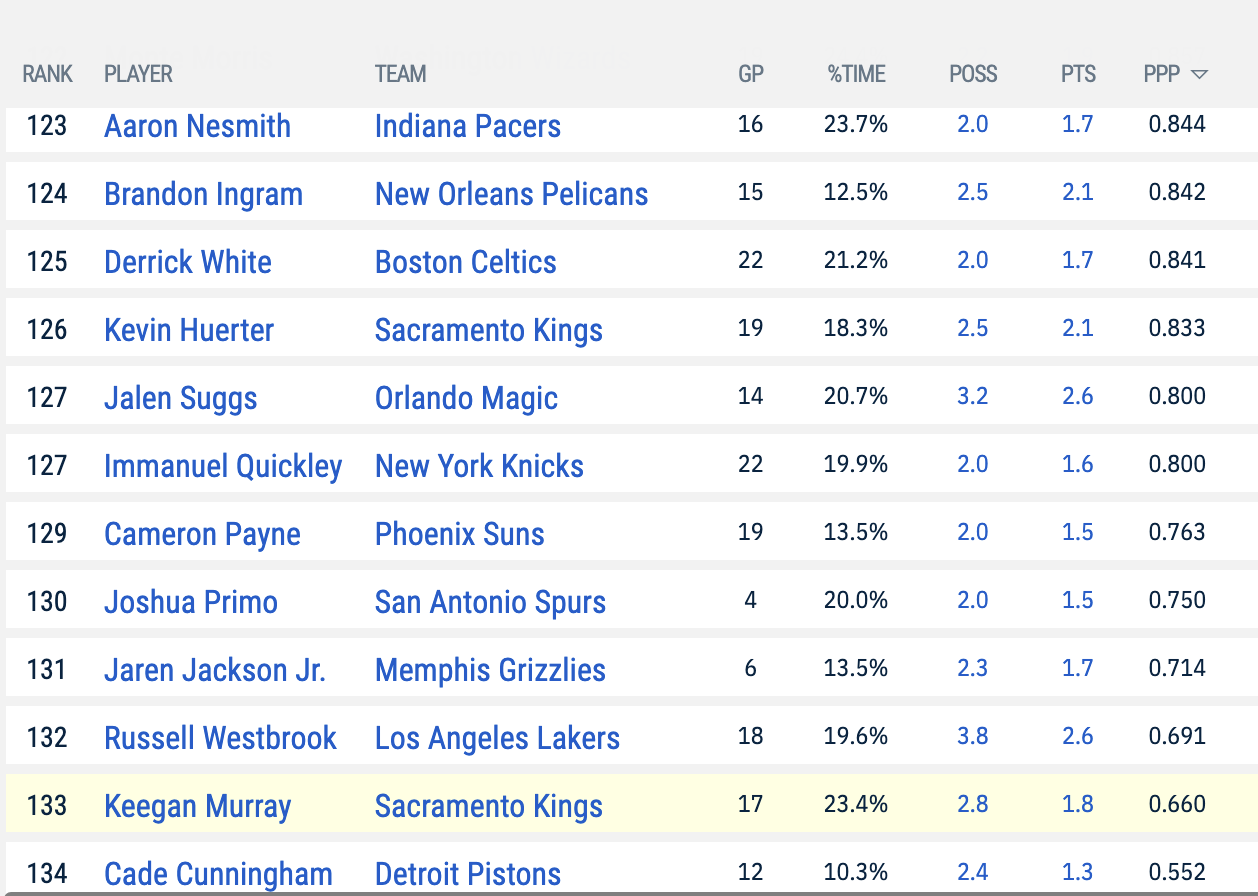 Murray frequently being in transition while still grading this poorly amplifies the concern. The environment could deserve some blame. As a team, the Kings lead the league in transition frequency but are LAST in score percentage. Something seems deeply flawed here.

Jaden Ivey was the best player on the board when Sacramento selected Murray. In the same manner, Tyrese Haliburton was flipped for Sabonis, the Kings could have drafted Ivey and flipped him for a hand-plucked asset from around the league.

The Kings owned picks No. 37 and No. 49, but traded both selections, collectively receiving two second-round picks. Given their desire to push for the playoffs/be good ASAP, I don't understand why they didn't keep one of these picks. The Kings weren't in a roster crunch. Sacramento ranks 26th in the league by allowing 117.2 points per game. Perhaps some fresh athleticism could have helped. It still could. Sacramento should be in the trade market for cheap wing-stoppers or two-way combo forwards -- someone to aid perimeter defense, where the Kings rank 21st in the league in opponent 3P% (37.0%).

The Kings are 11-9, putting them sixth in the Western Conference. Sacramento is 3.5 games from first and one game from 11th. It's a huge swing from the 2021-22 record of 30-52. Acquiring Sabonis netted a true X-Factor. A DHO/multi-faceted offensive initiating hub is a hot commodity in the NBA. The price was quite high, but the Kings got one.

At the moment, the engine is humming, and much of the offense appears sustainable. If Fox slumps, injuries strike, or the offense simply can't keep up, it'll be interesting to see how Sacramento slides.

Join Our Subscriber-Only NBA Chat
Chat with our writers and other RotoWire NBA fans for all the pre-game info and in-game banter.
Join The Discussion
ABOUT THE AUTHOR