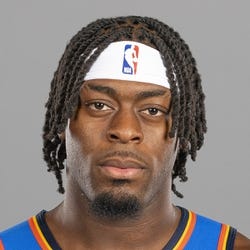 2022 Stats
PTS
14.3
REB
4.4
AST
2.3
STL
1.2
BLK
0.3
ROS Projections
PTS
REB
AST
STL
BLK
Unlock Our Projections
2022 Fantasy Outlook
One of the most promising young wing players in The Association, Dort enjoyed a career year during the 2021-22 season -- his third campaign in the NBA. He averaged 17.2 points and 4.2 rebounds per game, both career-best numbers, and he supplemented that with 1.7 assists, 0.9 steals and 0.4 blocks per contest. He also posted career-best numbers in field goal percentage (40.4 percent) and free throw percentage (84.3 percent), though the durability remains a concern. He played in 51 games, and while his first two years in the league were during the shortened seasons due to the pandemic, it's worth noting that he hasn't played more than 52 games in any of the three years he's spent in the league so far. Regardless of those concerns, Dort is a solid pickup in most formats since he's widely expected to be one of the top contributors for the Thunder, especially now that Chet Holmgren will miss the entire season due to a foot injury. He could be in line for another strong year worthy of a late-round selection in standard leagues. Read Past Outlooks
read more
Height 6'4"
Weight 215
DOB 4/19/1999
College Arizona State
Debut 2019
$Signed a four-year, $64.78 million contract with the Thunder in July of 2022. Contract includes $17.72 million team option for 2026-27.
Personal Bio/PreCareer Summary

Dort was born in 1999 in Montreal, Quebec, Canada. His parents are of Haitian descent, and Dort speaks both French and Creole. Dort began his high school career in Quebec, but transferred to Arlington Country Day School in Jacksonville, Florida and later to Conrad Academy in Orlando. He spent his senior year at The Athlete Institute, a prep school in Ontario, Canada. Dort's favorite movie is "Avengers: Infinity War", and his favorite artist is Drake. Outside of basketball, Dort is a soccer fan that supports Barcelona F.C. You can follow him on Twitter (@luguentz). Dort was named the 2018-19 Pac-12 Rookie of the Year after he collected the sixth most points in the conference (547) and finished eighth in the league in points per game (16.1) for Arizona State. The Montreal, Quebec, Canada native was named to the 2018-19 All-Pac-12 Second Team as well as the 18-19 Pac-12 All-Defensive Team. Dort helped Arizona State to the first round of the 2019 NCAA Tournament. He was also second in both free throws (145) and free-throw attempts (207), as well fourth in steals (52) in the Pac-12. Along with points, points per game, free throws, free-throw attempts and steals, he led the Sun Devils in three-point baskets (54) and three-point attempts (176). Dort announced that he would leave Arizona State after his freshman season and enter the 2019 NBA Draft. He went undrafted and then signed a contract with Oklahoma City.

FOklahoma City Thunder
See All NBA Rumors
Past Fantasy Outlooks
2021
2020
Dort really broke onto the scene in the 2020 bubble playoffs when he was the player primarily tasked with guarding James Harden. Dort was also left alone from three but kept launching, going 13-for-50 (26.0%) in the six-game series. Despite the struggles, it became clear that the Thunder would feature Dort more in 2020-21. That happened, with the sophomore wing averaging 14.0 points, 3.6 rebounds, 1.7 assists and 1.3 combined steals-plus-blocks in 29.7 minutes. Most notably, he made strides as a three-point shooter, hitting 2.2 per game at a passable 34.3 percent. He also became marginally more confident finding his own shot and dishing to teammates, though that's hardly the focus of his game. Dort is one of the better defenders in the NBA, and it's likely his offense will always lag behind. That said, there will continue to be plenty of opportunities for Dort to expand his game while with the deep-rebuild Thunder. The 22-year-old should continue starting at shooting guard and seeing roughly 30 minutes per game. He ranked just outside of the top 200 last season, but fantasy managers shouldn't be surprised if he can creep closer to the top 150 mark.
Dort went undrafted out of Arizona State, though he found a meaningful role with Oklahoma City in his first NBA campaign. The first-year wing averaged 6.8 points and 2.3 boards across 22.8 minutes as a key contributor off the bench in the Thunder's surprisingly successful season. Dort started the season with the Thunder's G-League affiliate but latched on to the parent club in December. Dort alternated time between the NBA and G-League for the next month before becoming a full-time starter at the end of January. Dort saw plenty of run in the playoffs, and he capped off the season with a season-high 30 points in the Thunder's Game 7 loss to the Rockets in the first round. Dort's late-season surge in the scoring department was due to multiple injuries in the Thunder's lineup, and he's not expected to take on a substantial offensive workload in 2020-21. Dort isn't an adept shooter, but he's made his bones as a defender, particularly one who isn't afraid to guard the opposing team's best player. Dort should be a full-time starter for the rebuilding Thunder this season, and he could be drafted as a specialist for defensive categories in upcoming fantasy drafts.
More Fantasy News