All BABIPs Are Not Alike

One of the things that becomes rather habitual in fantasy player analysis is to find the players at the extreme end of certain statistics and say they'll regress or bounce back. Last season, that player was Jeff Keppinger. Keppinger did what all one-year free agents seemingly do when they go to Tampa Bay in that he had a career year posting both full-season highs in batting average and batting average on balls in play of .325 and .332 respectively.

The odds were stacked against Keppinger because he puts so many balls in play. He does not walk that frequently, nor does he strike out frequently. Given the fact he is not blessed with the best of foot speed, Keppinger is heavily dependent upon his batting balls finding spots where defenders are not. In 2012, that happened. In 2013, it rarely did. While the two players vary greatly in foot speed, Juan Pierre is in the same boat. Because Pierre walks and strikes out so infrequently, his BABIP has fluctuated 63 points over the past five seasons and 59 points just over the past two.

That is why I'm bothered by the fact so many are panning Chris Johnson this offseason. Here are three examples from the 2014 Fantasy Baseball Guide (a magazine I help contribute to): 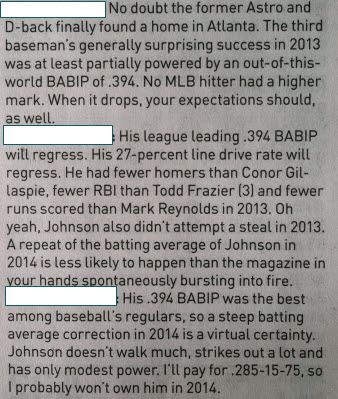 I recently made the case for why Johnson is draftable in mixed league formats behind the paywall, but let's address some of the issues listed in the above picture.

"Out of this world .394 BABIP" – Yes, that is an impossible number to repeat for a batter without excellent foot speed and a lot of luck. That said, Johnson has posted a BABIP of at least .350 in three of the past four seasons and had a .387 BABIP over 362 plate appearances in 2010. Yes, that did drop 70 points the following season, but his five-year BABIP is still .361. Only Joey Votto's is higher during that time.

"So a steep batting average correction in 2014 is a virtual certainty." – Is it? One of the biggest suppressors of batting averages and BABIP is the defensive shift. Players that have extreme pull tendencies are their own worst enemy; Johnson is not such a player. One of the reasons why Johnson and Votto have such high BABIP's in this shifty day and age is that they use all parts of the field and hit the ball hard.

He is currently the 19th third baseman off the board in NFBC mock drafts with a ADP of 265. While there is a lot of depth at the hot corner in 2014, his current ADP presents a lot of value for those that can pick him up at that point in the draft behind other players with much less of a track record. Chris Johnson is not Jeff Keppinger as they have very little in common other than neither player is very fleet of foot.