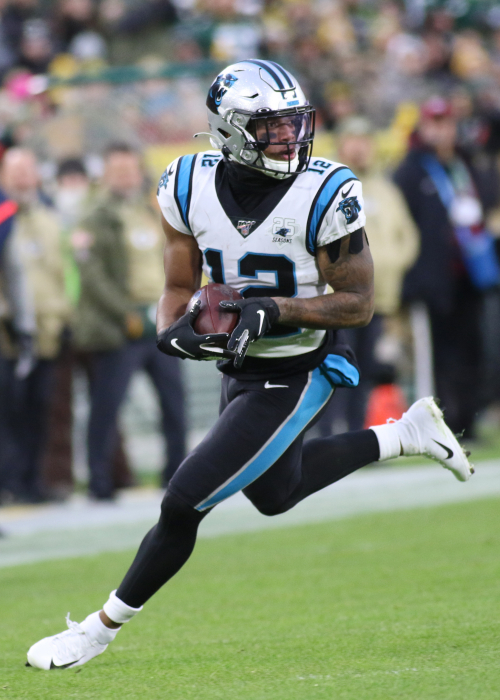 2021 Receiving Stats
REC
14
YDS
159
TD
1
AVG
11.4
TAR
19
2021 Receiving Projections
REC
YDS
TD
AVG
TAR
Unlock Our Projections
2021 Fantasy Outlook
The additions of quarterback Teddy Bridgewater and big-play wide receiver Robby Anderson last offseason seemed less than ideal for Moore, but despite playing with a conservative quarterback and established field-stretcher, it was Moore who emerged as one of the league’s top deep threats. Moore saw 118 targets (19th), but had six receptions for 40-plus yards (T-1st) and 19 catches for 20-plus (T-8th). He also averaged 18.1 YPC (1st by a mile) and 10.1 YPT (2nd). He did this despite seven drops too. The downside was a modest 66 receptions (catch rates go down in proportion to depth of target) and only four touchdowns. Not only was the Panthers offense mediocre, but Moore saw barely any red-zone work (nine targets). At 6-0, 210, Moore is a tough, physical receiver who can make catches over the middle and break tackles after contact. His average of 5.8 yards after the catch last season ranked third among wideouts with 50 or more receptions. He also has good speed (4.42 40) and excellent quickness, splitting his time between the perimeter and the slot. Curtis Samuel’s targets are gone, but they should more or less be replaced by a healthy Christian McCaffrey, who missed most of last year, and second-round pick Terrace Marshall. Even so, the offense should improve in Year 2 of coach Matt Rhule’s system, and newly acquired QB Sam Darnold — while far from a sure thing — at least has more upside than the departed Bridgewater. Read Past Outlooks
read more
RANKS
#50.02
ADP
#

WRCarolina Panthers
Read More News
NFL Stats
Loading NFL Stats...
Fantasy/Red Zone Stats
See red zone opportunities inside the 20, 10 and 5-yard lines along with the percentage of time they converted the opportunity into a touchdown.
Loading Fantasy/Red Zone Stats...
Advanced NFL Stats
How do DJ Moore's 2021 advanced stats compare to other wide receivers?
This section compares his advanced stats with players at the same position. The bar represents the player's percentile rank. For example, if the bar is halfway across, then the player falls into the 50th percentile for that metric and it would be considered average. The longer the bar, the better it is for the player.
Air Yards Per Game
90.0
Air Yards Per Snap
1.73
% Team Air Yards
34.6%
% Team Targets
24.2%
Avg Depth of Target
11.3 Yds
Catch Rate
31.6%
Drop Rate
5.3%
Avg Yds After Catch
3.3
Loading Advanced NFL Stats...
2021
2020
2019
2018
2021 NFL Game Log

vs Saints
Sunday, Sep 19th at 1:00PM
Overall QB Rating Against
46.9
Cornerbacks
57.3
Safeties
17.7
Linebackers
75.0
Loading Opponent Pass Defense Stats...
2021 DJ Moore Split Stats
Loading NFL Split Stats...
Measurables Review View College Player Page
How do DJ Moore's measurables compare to other wide receivers?
This section compares his draft workout metrics with players at the same position. The bar represents the player's percentile rank. For example, if the bar is halfway across, then the player falls into the 50th percentile for that metric and it would be considered average.
Height
6' 0"
Weight
210 lbs
40-Yard Dash
4.42 sec
Shuttle Time
4.07 sec
Cone Drill
6.95 sec
Vertical Jump
39.5 in
Broad Jump
132 in
Bench Press
15 reps
Hand Length
9.63 in
Arm Length
31.63 in
Recent RotoWire Articles Featuring DJ Moore
FanDuel Fantasy Football: Week 2 Picks
3 days ago
3 days ago
Josh Allen struggled against a stout Steelers defense last week and should rebound this week on the road in Miami.
NFL Waiver Wire: Week 2 Deep Dive
4 days ago
4 days ago
Dan Marcus goes deep into the free-agent pool to find upside adds who could pay off down the road, if not this week.
NFL Game Previews: Lions-Packers Matchup
5 days ago
5 days ago
Erik Siegrist previews the Monday Night Football matchup as Aaron Rodgers and the Packers look to bounce back against the Lions.
Yahoo DFS Football: Week 2 Picks
5 days ago
5 days ago
Sasha Yodashkin digs into the Week 2 slate and expects Nick Chubb to run roughshod over the Texans.
Past Fantasy Outlooks
2020
2019
2018
Given the Panthers' abominable quarterback play last year, Moore had about as good a season as could be expected in Year 2. He notched 8.7 YPT (13th) and dropped only three passes. He made big plays (four catches of 40-plus yards) but didn't get into the end zone often, thanks to his modest red-zone use (12 targets, only two inside the 10). Moreover, Moore's rushing stats - 172 yards on 13 carries as a rookie - crashed to 40 yards on only six carries in his sophomore campaign. At 5-11, 215, and running a 4.42 40, Moore is stout, compact and unusually fast for a receiver his height and weight. He has good open-field vision and is dangerous after the catch. The acquisition of new quarterback Teddy Bridgewater is likely to be a boost, not because he's anything special as a passer, but because he's light years ahead of last year's QB, Kyle Allen, and his accuracy and care with the football should help keep the offense moving more reliably than it did last season. Plus, new coach Matt Rhule (and OC Joe Brady) could install a more pass-friendly scheme than what the Panthers had in recent seasons under Ron Rivera. Moore figures to be the team's top WR target again, but the Panthers signed deep threat Robby Anderson to a twoyear deal this offseason and bring back tailback Christian McCaffrey and fourth-year man Curtis Samuel, providing sturdy competition for Bridgewater's attention.
The first receiver taken in the 2018 draft, Moore had a fine rookie season, especially considering the sorry state of the Panthers passing game for most of the year. He finished with 9.6 YPT and only one drop on 82 targets, broke three plays for more than 40 yards and also racked up 172 extra yards on the ground, giving him 960 yards from scrimmage on only 68 touches. At 5-11, 215, Moore is stout, powerful and fast (4.42 40). He's unusually quick for a heavy receiver and has good vision in the open field. Moore didn't see much red-zone work last year - only 11 looks inside the 20 - but that was with the 6-4 Devin Funchess around. Funchess is gone this year, and Moore sits atop the Panthers depth chart with only the small, quick Curtis Samuel as a significant alternate option for wideout targets. Of course, Christian McCaffrey, who broke the running back receptions record last year, also will play a big part in the passing game, and tight end Greg Olsen is set to play another year. But as long as Cam Newton's shoulder recovery goes well - so far so good at press time - this should be a better passing offense in 2019, and Moore is likely to be its top target.
The first receiver taken in the draft at pick No. 24, Moore finds himself in a crowded Carolina receiving corps, but one that's lacking a star. Devin Funchess profiles as the team's No. 1, but he's hardly more established than last year's top dog Kelvin Benjamin, who was dealt midseason during a playoff run. Newly signed Torrey Smith and Jarius Wright and last year's second-rounder Curtis Samuel are also in the mix, but likely as complementary options. At 6-0, 210, with 4.42 40 speed and good quickness, toughness and overall athleticism, Moore profiles as a faster Jarvis Landry or a bigger Steve Smith. Moore just turned 21 in April, so there's plenty of room for growth. Expect him to see targets right away, either from the slot or opposite Funchess, and there's a chance he winds up as the team's top receiver by season's end.
More Fantasy News