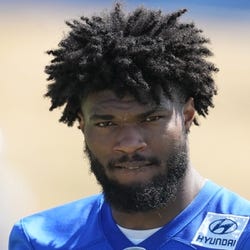 2022 Rush/Rec Stats
ATT
30
YDS
105
TD
1
YDS
18
TD
0
Rest-of-Season Projections
ATT
YDS
TD
YDS
TD
Unlock Our Projections
2022 Fantasy Outlook
A torn Achilles tendon suffered while working out last summer appeared as though it would cost Akers the entire year, but he made a semi-miraculous return by the final week of the regular season and mostly handled the lead role in the Rams backfield during the postseason. Prior to the injury, Akers had been a top breakout candidate, after closing out his rookie year with 221 rushing yards and two TDs in two playoff games. There was no sign of that form when the 2020 second-round pick returned from his Achilles tear for last season's playoffs, as he averaged 2.6 yards on 67 carries without a single run of more than 15 yards. Further complicating the picture, Henderson used his extra opportunities last year to establish himself as a useful option in the Los Angeles offense when he was able to stay healthy alongside Sony Michel. While Michel is now out of the picture, Henderson lingers as a threat to poach both carries and targets, with fifth-round rookie Kyren Williams a dark horse to get involved if Akers really struggles to regain the form he displayed at the end of his own rookie year. Read Past Outlooks
read more
RANKS
#52.97
ADP
#

RBLos Angeles Rams
Read More News
NFL Stats
Loading NFL Stats...
Fantasy/Red Zone Stats
See red zone opportunities inside the 20, 10 and 5-yard lines along with the percentage of time they converted the opportunity into a touchdown.
Loading Fantasy/Red Zone Stats...
Advanced NFL Stats
How do Cam Akers' 2022 advanced stats compare to other running backs?
This section compares his advanced stats with players at the same position. The bar represents the player's percentile rank. For example, if the bar is halfway across, then the player falls into the 50th percentile for that metric and it would be considered average. The longer the bar, the better it is for the player.
Broken Tackle %
16.7%
Positive Run %
66.7%
% Yds After Contact
68.6%
Avg Yds After Contact
2.4
Rushing TD %
3.3%
Touches Per Game
10.7
% Snaps w/Touch
51.6%
Air Yards Per Game
0.3
Air Yards Per Snap
0.02
% Team Air Yards
0.2%
% Team Targets
2.0%
Avg Depth of Target
0.5 Yds
Catch Rate
66.7%
Drop Rate
0.0%
Avg Yds After Catch
8.5
% Targeted On Route
13.6%
Avg Yds Per Route Run
0.82
Loading Advanced NFL Stats...
2022
2021
2020
2022 NFL Game Log

@ 49ers
Monday, Oct 3rd at 8:15PM
Overall QB Rating Against
27.1
Cornerbacks
51.2
Safeties
2.7
Linebackers
38.5
Loading Opponent Pass Defense Stats...
2022 Cam Akers Split Stats
Loading NFL Split Stats...
Measurables Review View College Player Page
How do Cam Akers' measurables compare to other running backs?
This section compares his draft workout metrics with players at the same position. The bar represents the player's percentile rank. For example, if the bar is halfway across, then the player falls into the 50th percentile for that metric and it would be considered average.
Height
5' 10"
Weight
217 lbs
40-Yard Dash
4.47 sec
Vertical Jump
35.5 in
Broad Jump
122 in
Bench Press
20 reps
Hand Length
9.00 in
Arm Length
30.63 in
Recent RotoWire Articles Featuring Cam Akers
NFL Game Previews: Rams-49ers Matchup
4 days ago
4 days ago
Erik Siegrist analyzes the Monday night matchup as Matthew Stafford and the Rams travel to San Francisco in a key NFC West tilt.
Exploiting the Matchups: Week 4 Start/Sit and Streamers
4 days ago
4 days ago
Jamaal Williams looks like an RB2 play even if D'Andre Swift suits up, with RB1 status up for discussion in the likely event Swift doesn't play against the Seahawks this weekend.
Weekly Rankings: Week 4 Value Meter
5 days ago
5 days ago
A.J. Brown finally converted his volume into a score last week.
Past Fantasy Outlooks
2021
2020
It took until Week 12 for Akers to seize the lead role in the Rams backfield last year. After doing little with 14 carries in Week 1, the rookie took a back seat to Malcolm Brown and Darrell Henderson the next couple months, never seeing more than 10 touches or 20 offensive snaps in a game. When Akers turned nine carries into 84 yards and a TD against the 49ers in late November, coach Sean McVay finally handed him the reins and the second-round pick never looked back. A powerful runner with a three-down skill set, Akers has 4.47 speed to turn a small crease into a big gain, and he showed it last season with runs of 61, 46, 35 and 25 yards. He finished with a modest 4.3 YPC despite the quartet of long gains, but any inconsistency seemed to be hammered out by season's end, as Akers ran for 221 yards and two TDs in two playoff games. As the 2021 campaign approached, Akers was headed toward a true featured role, but a torn Achilles' that he suffered in July derailed that outcome.
Akers was essentially a one-man show in a moribund Florida State offense during his college career, but that experience may have prepared him well for a three-down role in the pros. A strong, compact runner at 5-10, 217, with the power to be an asset in short-yardage situations, Akers ran a 4.47 40 at the combine, showing he can be more than just a grinder. His good vision makes him dangerous in the open field, though he seems to prefer running through tacklers rather than slipping by them. Akers is also a capable receiver, catching 30 of 42 targets for 225 yards and four scores last season. With Todd Gurley off to Atlanta, Akers has an opportunity to make an immediate impact. A backfield committee wouldn't be surprising, though, with holdovers Darrell Henderson and Malcolm Brown also looking for touches. But of the trio, Akers' skill set makes him the most likely to secure a true lead role.
More Fantasy News