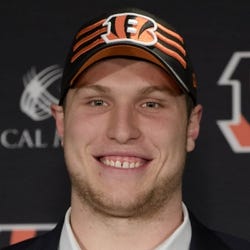 TECincinnati Bengals
Read More News
NFL Stats
Loading NFL Stats...
Fantasy/Red Zone Stats
See red zone opportunities inside the 20, 10 and 5-yard lines along with the percentage of time they converted the opportunity into a touchdown.
Loading Fantasy/Red Zone Stats...
Advanced NFL Stats
How do Drew Sample's 2022 advanced stats compare to other tight ends?
This section compares his advanced stats with players at the same position. The bar represents the player's percentile rank. For example, if the bar is halfway across, then the player falls into the 50th percentile for that metric and it would be considered average. The longer the bar, the better it is for the player.
Air Yards Per Game
-1.0
Air Yards Per Snap
-0.05
% Team Air Yards
-0.3%
% Team Targets
2.3%
Avg Depth of Target
-1.0 Yds
Catch Rate
100.0%
Drop Rate
0.0%
Avg Yds After Catch
0.0
% Targeted On Route
22.2%
Avg Yds Per Route Run
-0.22
Loading Advanced NFL Stats...
2022
2021
2020
2019
2022 NFL Game Log

@ Jets
Sunday, Sep 25th at 1:00PM
Overall QB Rating Against
107.3
Cornerbacks
72.7
Safeties
118.8
Linebackers
90.9
Loading Opponent Pass Defense Stats...
2022 Drew Sample Split Stats
Loading NFL Split Stats...
Measurables Review View College Player Page
How do Drew Sample's measurables compare to other tight ends?
This section compares his draft workout metrics with players at the same position. The bar represents the player's percentile rank. For example, if the bar is halfway across, then the player falls into the 50th percentile for that metric and it would be considered average.
Height
6' 4"
Weight
255 lbs
40-Yard Dash
4.71 sec
Shuttle Time
4.31 sec
Cone Drill
7.15 sec
Vertical Jump
33.5 in
Broad Jump
115 in
Hand Length
9.63 in
Arm Length
33.38 in
Recent RotoWire Articles Featuring Drew Sample
Week 3 Friday Injury Report: Kittle Cleared, Herbert Questionable, Bills Defense Depleted
3 days ago
3 days ago
A lot of star players are listed as questionable this week, but George Kittle isn't one of them.
Target Breakdown: Week 2 WR/TE Usage Recap & Week 3 Waivers
6 days ago
6 days ago
Garrett Wilson's role is growing, and he's not alone in that regard among rookie wide receivers. Plus, there are some interesting TEs available on waivers in most leagues.
Target Breakdown: Week 1 WR/TE Usage Recap & Week 2 Waiver Picks
12 days ago
12 days ago
Curtis Samuel is one of the most popular waiver adds this week, but Jerry Donabedian would rather have Samuel's teammate, rookie first-round pick Jahan Dotson.
Preseason Week 3 Recap: Fantasy Winners & Losers, Plus Notes on Every Team
28 days ago
28 days ago
The final week of the preseason was encouraging for sleeper tight ends David Njoku and Mo Alie-Cox.
Past Fantasy Outlooks
2021
2020
2019
Sample was pressed into more action for the Bengals in 2020 than was initially expected following the Week 2 injury to C.J. Uzomah. Sample, a second-round pick in 2019, ended up with 40 catches for 349 yards and his first NFL touchdown in Week 16 against the Texans. With Uzomah returning, he may end up being the backup again in 2021.
Rookie tight ends rarely produce much in the NFL, and that was certainly the case with Sample, who had only five catches for 30 yards on six targets in nine games before an ankle injury ended his season. A second-round pick in 2019 out of the University of Washington, Sample was selected more for his blocking than his receiving skills, topping out at 25 catches for 252 yards in his senior season there. So while there will be more opportunities for him to see the field following the departure of Tyler Eifert, it's unlikely to translate into fantasy production.
Sample went in the second round of the draft as the 52nd overall pick after the Bengals traded down earlier in the round. He's well-regarded for his blocking skills and good hands, but is not a big-play receiver, with just average speed. Rookie tight ends usually take awhile to develop, and it's likely that Sample will be undergoing that developmental process as the third-stringer behind C.J. Uzomah and Tyler Eifert, who signed a one-year deal to remain with the Bengals this offseason.
More Fantasy News