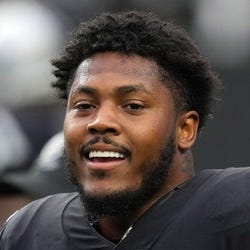 2022 Rush/Rec Stats
ATT
42
YDS
192
TD
0
YDS
59
TD
0
Rest-of-Season Projections
ATT
YDS
TD
YDS
TD
Unlock Our Projections
2022 Fantasy Outlook
Jacobs finished last season on a high note over the final month, but he didn't have a 100-yard rushing game until Week 16 and fell shy of 1,000 yards for the first time in his career. His mediocre 2.0 yards per carry after contact was about the same as the year before but a huge decline from the 2.8 he managed as a rookie, and he averaged only 14.5 carries per game after topping 18 both of his first two seasons. Jacobs also began to show some cracks in the passing game, with five drops being as many as he had his first two years combined. The addition of Josh McDaniels as head coach could help the entire Las Vegas offense, and WR Davante Adams figures to be even more important. That could once again leave Jacobs in more of a complementary role rather than being a focal point as he was under Jon Gruden, but it might work out from a production standpoint if the Raiders are frequently in the red zone and their fourth-year back doesn't lose too many carries to Kenyan Drake or fourth-round pick Zamir White. Read Past Outlooks
read more
RANKS
#44.11
ADP
#

RBLas Vegas Raiders
Read More News
NFL Stats
Loading NFL Stats...
Fantasy/Red Zone Stats
See red zone opportunities inside the 20, 10 and 5-yard lines along with the percentage of time they converted the opportunity into a touchdown.
Loading Fantasy/Red Zone Stats...
Advanced NFL Stats
How do Josh Jacobs' 2022 advanced stats compare to other running backs?
This section compares his advanced stats with players at the same position. The bar represents the player's percentile rank. For example, if the bar is halfway across, then the player falls into the 50th percentile for that metric and it would be considered average. The longer the bar, the better it is for the player.
Broken Tackle %
34.5%
Positive Run %
79.3%
% Yds After Contact
70.6%
Avg Yds After Contact
3.1
Rushing TD %
0.0%
Touches Per Game
15.5
% Snaps w/Touch
25.6%
Air Yards Per Game
-4.5
Air Yards Per Snap
-0.07
% Team Air Yards
-1.6%
% Team Targets
2.7%
Avg Depth of Target
-4.5 Yds
Catch Rate
25.0%
Drop Rate
0.0%
Avg Yds After Catch
18.5
% Targeted On Route
22.2%
Avg Yds Per Route Run
1.64
Loading Advanced NFL Stats...
2022
2021
2020
2019
2022 NFL Game Log

@ Titans
Sunday, Sep 25th at 1:00PM
Overall QB Rating Against
115.1
Cornerbacks
146.0
Safeties
82.1
Linebackers
39.6
Loading Opponent Pass Defense Stats...
2022 Josh Jacobs Split Stats
Loading NFL Split Stats...
Measurables Review View College Player Page
How do Josh Jacobs' measurables compare to other running backs?
This section compares his draft workout metrics with players at the same position. The bar represents the player's percentile rank. For example, if the bar is halfway across, then the player falls into the 50th percentile for that metric and it would be considered average.
Height
5' 10"
Weight
220 lbs
Hand Length
10.13 in
Arm Length
31.63 in
Recent RotoWire Articles Featuring Josh Jacobs
NFL Picks: NFL Week 3 Player Props To Target
Yesterday
Yesterday
Walter Hand checks in on the NFL player props market for Week 3 and identifies a wide variety of wagers to target, including a look at Brandon Aiyuk as he gets set to face the Broncos.
Gameday Injuries: Week 3
Yesterday
Yesterday
Juan Carlos Blanco breaks down the latest as of early Sunday morning on another robust NFL injury landscape in Week 3.
DraftKings NFL: Week 3 Breakdown
3 days ago
3 days ago
Ryan Belongia analyzes the DraftKings Week 3 contest as Leonard Fournette's salary keeps dropping.
Week 3 Friday Injury Report: Kittle Cleared, Herbert Questionable, Bills Defense Depleted
3 days ago
3 days ago
A lot of star players are listed as questionable this week, but George Kittle isn't one of them.
Exploiting the Matchups: Week 3 Start/Sit and Streamers
4 days ago
4 days ago
Jerry Donabedian thinks Drake London will have the best Week 3 of any rookie receiver.
Past Fantasy Outlooks
2021
2020
2019
Jacobs' second season in the NFL was much like his first, for good and for bad. The 23-year-old runs with good power and balance, finishing sixth among RBs in broken tackles last year, but his tendency to run through contact rather than around it has contributed to a series of nagging injuries that have sapped his production without actually sidelining him. He's an adequate receiver and can fill a three-down role if needed, but he has room for improvement in that area, and coach Jon Gruden seemingly prefers to rest his lead runner in obvious passing situations. Jacobs' lack of breakaway speed was another issue last year, as he failed to produce a single carry of at least 40 yards. The Raiders' offensive line is also in the process of being completely rebuilt, forcing Jacobs to do more work for fewer yards. The team seemed to recognize some of those issues this offseason, but the solution doesn't look great for Jacobs' fantasy outlook, with Kenyan Drake joining the Raiders on a two-year, $11 million deal. Both backs are used to seeing significant touches in the red zone, with Jacobs leading the league in red-zone carries in 2020 while Drake finished fourth, and there won't be enough volume for both to thrive even if the Raiders mix in some dual-halfback sets. The two do possess complementary skill sets, so the tandem should improve the overall efficiency of the offense, but Jacobs may have trouble topping 300 touches again.
Jacobs entered the NFL as a talented but relatively unproven back who had never gotten a chance to fully carry the load during his college days at Alabama. The Raiders wasted little time in letting him prove he could be their top guy, and the rookie delivered, averaging 20.2 touches in 13 games (a lingering shoulder injury cost him three weeks in December). Often playing at less than 100 percent healthy, Jacobs displayed an impressive ability to plow through traffic with power and balance, finishing ninth in broken tackle rate (one for every 9.3 carries). Despite his generally successful first campaign, Jacobs still has some things to prove. That he wore down as the season progressed isn't exactly encouraging, and he wasn't a difference-maker as a receiving weapon, though the team's passing attack in general was a disappointment beyond TE Darren Waller. The Raiders are counting on rookies to spark improvement, with first-round pick Henry Ruggs and third-round pick Bryan Edwards joining Tyrell Williams to give the offense more of a downfield component. Ruggs, in particular, can prevent safeties from creeping toward the line to stop the run, with a 4.27 40 making him one of the fastest players in the league. Jacobs' lead role on the ground is safe, but room for receiving growth appears somewhat limited.
The first running back off the board in the 2019 draft, Jacobs landed in a potential starting role when Oakland nabbed him with the 24th overall pick. While he didn't carry a heavy workload in a crowded Alabama backfield during his college days, he impressed with what chances he got, showing a versatile skill set and running with power and purpose. At 5-10, 220, Jacobs runs with a low center of gravity, and he should see plenty of short-yardage and goal-line carries regardless of his other duties in the Oakland backfield. His balance and vision are also pluses, so while he lacks elusiveness and there are questions about his ability to outrun defenders in the open field, Jacobs can still pick up extra yards after the initial point of contact. He also showed enough as a receiver to stay on the field for passing downs, though he might never be a true difference-maker through the air and Jalen Richard will also be a factor in that area. The club signed Isaiah Crowell this offseason, but the former Brown and Jet quickly took himself out of the picture with a torn Achilles during April workouts and was replaced by Doug Martin. Marshawn Lynch retired, and the Raiders otherwise focused on upgrading their passing game with the additions of Antonio Brown and Tyrell Williams, leaving Jacobs to spearhead the rushing attack.
More Fantasy News