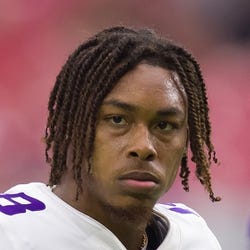 2022 Receiving Stats
REC
88
YDS
1277
TD
6
AVG
14.5
TAR
127
Rest-of-Season Projections
REC
YDS
TD
AVG
TAR
Unlock Our Projections
2022 Fantasy Outlook
On a per-target basis, Jefferson's second NFL season (9.7 YPT) wasn't quite as dominant as his first (11.2). But that's nitpicking; the bigger picture shows he added 42 targets from the previous year and was still one of the most efficient wideouts in the league. Only 11 produced more yards per target, and that includes four who saw 70 or fewer passes. Jefferson finished fourth among WRs in targets and catches, second in receiving yards and tied for sixth in touchdowns. The 23-year-old often makes it look easy, seemingly playing both bigger and faster than his on-paper metrics suggest (6-1, 195, 4.43 40, 37.5-inch vertical). From a fantasy standpoint, there's just as much to like, with Jefferson playing in an above-average offense that has enough weapons to keep defenses honest but nobody to challenge him as the go-to guy. Jefferson surpassed Adam Thielen for that honor mid-2020, and while the 31-year-old Thielen scored 10 touchdowns last year, he saw 2.5 fewer targets per game than his young running mate (9.8 to 7.3). If anything, the split could go even more in Jefferson's direction this year, though there is another variable with new head coach Kevin O'Connell arriving from the Rams. Other than that, stability is the story, with QB Kirk Cousins and RB Dalvin Cook joining Jefferson, Thielen and TE Irv Smith to form one of the league's more well-rounded groups of skill-position players. Read Past Outlooks
read more
RANKS
#5.01
ADP
#

WRMinnesota Vikings
Read More News
NFL Stats
Loading NFL Stats...
Fantasy/Red Zone Stats
See red zone opportunities inside the 20, 10 and 5-yard lines along with the percentage of time they converted the opportunity into a touchdown.
Loading Fantasy/Red Zone Stats...
Advanced NFL Stats
How do Justin Jefferson's 2022 advanced stats compare to other wide receivers?
This section compares his advanced stats with players at the same position. The bar represents the player's percentile rank. For example, if the bar is halfway across, then the player falls into the 50th percentile for that metric and it would be considered average. The longer the bar, the better it is for the player.
Air Yards Per Game
104.3
Air Yards Per Snap
1.54
% Team Air Yards
42.0%
% Team Targets
28.5%
Avg Depth of Target
10.2 Yds
Catch Rate
63.8%
Drop Rate
2.4%
Avg Yds After Catch
5.6
% Targeted On Route
27.9%
Avg Yds Per Route Run
2.81
Loading Advanced NFL Stats...
2022
2021
2020
2022 NFL Game Log

vs Jets
Sunday, Dec 4th at 1:00PM
Overall QB Rating Against
65.2
Cornerbacks
64.4
Safeties
67.5
Linebackers
80.2
Loading Opponent Pass Defense Stats...
2022 Justin Jefferson Split Stats
Loading NFL Split Stats...
Measurables Review View College Player Page
How do Justin Jefferson's measurables compare to other wide receivers?
This section compares his draft workout metrics with players at the same position. The bar represents the player's percentile rank. For example, if the bar is halfway across, then the player falls into the 50th percentile for that metric and it would be considered average.
Height
6' 1"
Weight
195 lbs
40-Yard Dash
4.43 sec
Vertical Jump
37.5 in
Broad Jump
126 in
Hand Length
9.13 in
Arm Length
33.00 in
Recent RotoWire Articles Featuring Justin Jefferson
Week 13 NFL DFS: 10 Players Under 10 Percent
Yesterday
Yesterday
Ryan Pohle breaks down his favorite GPP targets for the Week 13 main slate, and he likes Jared Goff as a quality QB pivot from the highest priced options.
DraftKings NFL: Week 13 Breakdown
2 days ago
2 days ago
Ryan Belongia analyzes the DraftKings Week 13 contest as there won't be a better spot for Nick Chubb all season than Sunday against the Texans.
Wide Receivers vs. Cornerbacks: Week 13 Matchups
2 days ago
2 days ago
A.J. Brown has both a good matchup and the Revenge Game narrative in Week 13.
NFL DFS Picks: Yahoo Plays and Strategy for Week 13 Sunday Baller
3 days ago
3 days ago
Sasha Yodashkin digs into the Week 13 slate and recommends you don't overlook Nick Chubb against a vulnerable Texans run defense.
NFL Game Previews: Saints-Buccaneers Matchup
3 days ago
3 days ago
Erik Siegrist analyzes the Monday night matchup as Tom Brady and the Bucs take on the Saints in a key NFC South showdown.
Past Fantasy Outlooks
2021
2020
With Stefon Diggs sent off to Buffalo, the Vikings needed to find a reliable complement to Adam Thielen last season. It didn’t take long. Despite a limited offseason and training camp, and playing only 65 snaps combined in Weeks 1-2, Jefferson set the league on fire as a rookie, leading the NFL in YPT (11.2) by a mile and finishing fourth in receiving yards (1,400). At 6-1, 202, and with good speed (4.45), Jefferson is athletic, smooth and explosive. Despite getting only 125 targets (18th), Jefferson tied for the league lead in catches of 20-plus yards with 23. The only hole in his game was red-zone usage — he saw only 12 inside-the-20 targets, eight inside the 10 and two inside the five, while his less efficient teammate Thielen had 20, 13 and eight, respectively. It’s no wonder then that Thielen had 14 touchdowns on 108 targets to Jefferson’s seven on 125. Heading into 2021, Jefferson is firmly established as Kirk Cousins’ big-play receiver and likely top dog. Thielen is still solid and should reprise a prominent role, but the depth chart thins considerably after those two, so expect an increase in targets for Jefferson in Year 2.
The Vikings traded Stefon Diggs to the Bills for the 22nd pick and used it to select Jefferson, his replacement. Jefferson was a monster at LSU last year with 1,540 yards and 18 touchdowns on 111 catches. At 6-1, 202, Jefferson has above average size and good speed (4.43), and his vertical (37.5 inches) and broad jumps (126 inches) were both in the top quartile among his peers. While Jefferson might be ideally suited for the slot - where he dominated at LSU - he'll likely have to play out wide more in Minnesota's two-TE offense. Even in three-wide formations, it could be Adam Thielen rather than Jefferson getting the majority of slot snaps. Either way, the rookie should begin the year as the Vikings' No. 2 target behind Thielen, providing some much-needed downfield playmaking for Kirk Cousins.
More Fantasy News