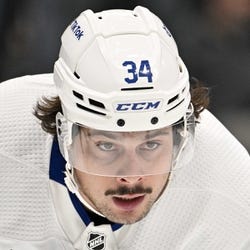 IR
Injury Knee
Est. Return 2/18/2023
2022 Stats
G
25
A
28
PP Pts
18
+/-
19
PIM
16
ROS Projections
G
A
PP Pts
+/-
PIM
Unlock Our Projections
2022 Fantasy Outlook
Matthews won the Hart Trophy as NHL MVP last season. It came as no surprise considering he finished the year with 60 goals in 73 games, becoming the first player since Steven Stamkos in 2011-12 to reach such a milestone. Matthews has the best shot in the league, and when you put a league-leading 348 of them on goal as he did a season ago, a decent chunk are going to find the back of the net. Matthews is a sniper, first and foremost, but he also finished with a career-high 46 assists a season ago. Toss in 29 power-play points and you have an elite fantasy asset. Matthews is right there with Connor McDavid and Leon Draisaitl as a top-three fantasy pick this coming fall, and he should receive a minor bump in leagues which place an additional emphasis on goals scored. Read Past Outlooks
read more
#