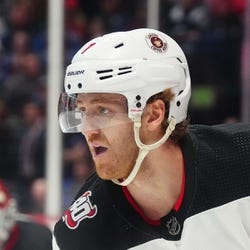 2022 Stats
G
13
A
33
PP Pts
20
+/-
18
PIM
32
ROS Projections
G
A
PP Pts
+/-
PIM
Unlock Our Projections
2022 Fantasy Outlook
Hamilton dealt with multiple injuries in his first season with the Devils, ultimately missing 20 of New Jersey's 82 regular season games. On top of that, his overall production - 9 goals, 30 points - was down when he was able to suit up. The Devils handed Hamilton a seven-year, $63 million contract in the summer of 2021, only to give him 2:30 worth of power-play time per game, a low total for a true No. 1 quarterback with the man advantage. To summarize, Hamilton wasn't used as often as he should have been and he didn't perform up to standards when out there. It seems likely to be a one-year fluke given what we have seen from him in the past, so target him as a buy-low target on draft day. Read Past Outlooks
read more
#