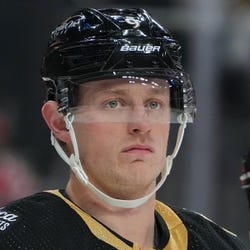 2022 Stats
G
15
A
19
PP Pts
9
+/-
10
PIM
4
ROS Projections
G
A
PP Pts
+/-
PIM
Unlock Our Projections
2022 Fantasy Outlook
Eichel's inevitable divorce from the Sabres finally happened in early November. He was dealt to Vegas, had the disc replacement surgery in his neck he was seeking, and returned in mid-February to play all 34 of the Golden Knights' games the rest of the way. Eichel's production was marginal (14 goals, 25 points), at least for him, but that's secondary to the fact he returned to full health. There may be no more obvious bounce-back candidate in the league given what we have seen from Eichel in the past. He's worth reaching for in your draft given his massive upside. Read Past Outlooks
read more
#