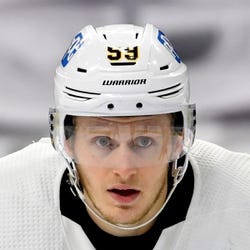 2022 Stats
G
20
A
26
PP Pts
11
+/-
4
PIM
32
ROS Projections
G
A
PP Pts
+/-
PIM
Unlock Our Projections
2022 Fantasy Outlook
Not that there has been any doubt for quite a while, but Guentzel proved again this past season he's a terrific player in his own right and not just a product of playing alongside Sidney Crosby. Sid helps, of course, but Guentzel's 40 goals and 84 points in 76 games last year was much his own doing. He was even better in Pittsburgh's brief playoff appearance, scoring at least one goal in six of their seven first-round games against the Rangers. With Evgeni Malkin and Kris Letang re-signed and Crosby with plenty of gas left in the tank, the Pens seem as if they will run out the same core as a season ago. That's good news for Guentzel, who makes for a fine early-round selection in all fantasy formats. Read Past Outlooks
read more
#

Calculate Stats Over Time
Just click on any two dates.
Scoring
FanDuel
DraftKings
Yahoo DFS
FantasyDraft
Head2Head
Loading Skater Game Log...
2022–23 Time On Ice Stats
Ice Time
Power Play
Short-Handed
2020–21
20:16
3:01
0:03
2021–22
20:06
3:33
0:05
2022–23
20:04
3:47
0:03
Penguins Depth Chart
Our full team depth charts are reserved for RotoWire subscribers.
Subscribe Now
Penguins Power Play Depth Chart
Our full team depth charts are reserved for RotoWire subscribers.
Subscribe Now
Recent RotoWire Articles Featuring Jake Guentzel See More
DraftKings NHL: Friday Breakdown
12 days ago
12 days ago
Michael Finewax recommends Vancouver's J.T. Miller against the Avalanche on Friday.
DraftKings NHL: Wednesday Breakdown
14 days ago
14 days ago
Sasha Yodashkin suggests rolling with B’s veteran Brad Marchand against the Islanders on Wednesday.
DraftKings NHL: Tuesday Breakdown
22 days ago
22 days ago
Sasha Yodashkin previews Tuesday’s slate, rolling with Devils youngster Jack Hughes in Carolina.
NHL DFS Picks: Yahoo Plays and Lineup Strategy for Tuesday, January 10
22 days ago
22 days ago
Chris Morgan looks over Tuesday's slate as Andrei Vasilevskiy and the Lightning host the struggling Blue Jackets.
Hutch's Hockey: Back in the Battle
23 days ago
23 days ago
Shawn Hutchinson shares his strategy for dealing with players coming back from injury and offers up some waiver-wire additions for the week ahead.
Past Fantasy Outlooks
2021
2020
2019
2018
2017
2013
For the fourth consecutive season, Guentzel reached the 20-goal milestone. He pocketed 23 goals with 57 points while averaging 20:16 of ice time over 56 games. The 26-year-old winger has scored 43 goals over the last two seasons after racking up 40 during the 2018-19 campaign. However, he's played just 95 games during that span due to injuries and shortened seasons. Of course, a big part of Guentzel's fantasy charm is that he plays on Sidney Crosby's wing and that's not expected to change anytime soon. The Nebraska native also scored a career-high 18 power-play points last year and he'll be a staple on the team's top unit again during the 2021-22 season. Guentzel should have no problem getting back over the 30-goal mark as long as he stays healthy.
Guentzel is a first-line, goal-scoring winger who thinks the game at the same speed as linemate and future Hall-of-Famer Sidney Crosby. And two seasons ago, that netted Guentzel 40 goals and 76 points. Last season, he missed significant time with a major shoulder injury, but he should be ready to roll come January. He will play a big role on the Pens' top power-play unit and alongside Sid the Kid at even strength. Guentzel is set to deliver the best point-per-game rate of his career.
It was yet another banner year for Guentzel in 2018-19, as he set career highs in goals (40), assists (36) and shots (227) while posting a plus-13 rating in 82 games. The tenacious winger has improved every year since making his NHL debut in 2016-17, and has cemented his role skating on Sidney Crosby's wing on the Penguins' top line over the past two seasons. The one knock on the youngster's game has been a lack of productivity on the power play, however, it appears that could be at an end now that Phil Kessel is no longer in the picture. With a spot now open on the No. 1 power-play unit, Guentzel figures to see himself bumped up to the top group in 2019-20. The additional ice time and opportunity that will come with that role could help Guentzel surpass the 80-point mark for the first time in his career this season, making him an elite fantasy option in all formats.
Guentzel set career highs in goals (22), assists (26) and shots on goal (171) in 2017-18 -- his second year but first full campaign. While he's only 5-foot-11 and 167 pounds, the speedy winger is not afraid to throw his body around, as he dished out 142 hits last year. After trying out many different combinations, Pittsburgh may have finally found a long-term winger for Sidney Crosby in “Jake N Bake,” who provides a solid scoring touch, high-end skating ability and a strong hockey IQ. If he remains locked in on the top line, there is little doubt the 22-year-old will set another round of career bests this upcoming season.
After tallying 33 points in 40 regular-season games and following that up with a rookie-record 21 in 25 playoff contests, Guentzel is a near lock to join the ever-prolific Sidney Crosby on the Penguins’ top line to start the 2017-18 campaign. A natural center, the 22-year-old’s meteoric ascension could cause many a fantasy owner to overreach, but the savvier types know that he’s facing a limited role on the man advantage and his 19.8 shooting percentage from last year is not sustainable. While the speedy pivot starred in the AHL and doesn't seem like a candidate for a sophomore slump, breaking the bank on a player with less than a full season’s worth of NHL experience might not be the best course of action -- even with Crosby at his side.
The Penguins snagged Guentzel in the third-round pick of the 2013 draft. At 5-foot-9, 153 pounds, the smallish centerman will need to prove himself every step of the way. The 19-year-old scored 29 goals and 73 points in 60 games for Sioux City of the USHL last year. Guentzel is likely several seasons away from fighting for a roster spot.
More Fantasy News