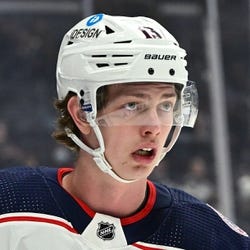 2022 Stats
G
6
A
7
PP Pts
4
+/-
-4
PIM
2
ROS Projections
G
A
PP Pts
+/-
PIM
Unlock Our Projections
2022 Fantasy Outlook
Johnson started last season at the University of Michigan and finished the year with Columbus. In between, he played for the Canadian Olympic team. He has since played for Canada at the World Championship and the delayed and since completed 2022 World Juniors. Johnson, the fifth-overall pick in 2021, is one of the most gifted offensive prospects in the NHL. He's an excellent puck handler and dynamic in open space. It would be great to see the Blue Jackets insert him on their top line alongside Johnny Gaudreau and Patrik Laine in 2022-23. While that seems unlikely to happen, Columbus is going to have to figure out a way to ensure Johnson gets significant ice time all season long. Read Past Outlooks
read more
#