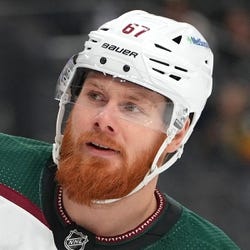 2021 Stats
G
20
A
14
PP Pts
7
+/-
-9
PIM
52
2022 Projections
G
A
PP Pts
+/-
PIM
Unlock Our Projections
2022 Fantasy Outlook
Crouse is best served as a bottom-six banger, but the Coyotes, lacking better options, increased his offensive role in 2021-22 and to Crouse's credit, he responded. The 2015 No. 11 overall draft selection finished the season with career-best marks in goals (20), points (34), and power-play points (7) while adding 180-plus hits (181) for the third time in four years. Crouse's numbers would have been even more impressive had he not missed Arizona's final 12 games due to a hand injury. The Coyotes made Crouse a priority this offseason, inking him to a new five-year, $21.5 million contract extension. It's difficult to envision a scenario in which Crouse's offensive production actually increases, but the hits are here to stay, making him a legitimate late-round option in leagues which value that statistic. Read Past Outlooks
read more
#

Calculate Stats Over Time
Just click on any two dates.
Scoring
FanDuel
DraftKings
Yahoo DFS
FantasyDraft
Head2Head
Loading Skater Game Log...
2021–22 Time On Ice Stats
Ice Time
Power Play
Short-Handed
2019–20
13:35
0:02
1:25
2020–21
14:18
0:17
2:00
2021–22
17:26
1:55
1:45
Coyotes Depth Chart
Our full team depth charts are reserved for RotoWire subscribers.
Subscribe Now
Coyotes Power Play Depth Chart
Our full team depth charts are reserved for RotoWire subscribers.
Subscribe Now
Recent RotoWire Articles Featuring Lawson Crouse
NHL Barometer: Risers & Fallers
174 days ago
174 days ago
Jan Levine looks at the rise and fallers in hockey for the week, including Tampa Bay's Steven Stamkos.
NHL Waiver Wire: Pickups of the Week
179 days ago
179 days ago
Evan Berofsky analyzes the top waiver-wire options for the week, including Vegas' Chandler Stephenson.
NHL Waiver Wire: Pickups of the Week
186 days ago
186 days ago
Evan Berofsky analyzes the top waiver-wire options for the week, including Pittsburgh's Evan Rodrigues.
Frozen Fantasy: Silly Season is Here
191 days ago
191 days ago
The Trade Deadline is almost upon us and Janet Eagleson reviews some possible moves and a few available waiver pickups.
NHL Waiver Wire: Pickups of the Week
193 days ago
193 days ago
Evan Berofsky analyzes the top waiver-wire options for the week, including Colorado's Valeri Nichushkin.
Past Fantasy Outlooks
2021
2020
2019
2018
2017
2015
Crouse has made himself a relevant name in fantasy circles, primarily because he's among the league leaders in hits almost every season. Crouse has finished with no fewer than 155 hits in any campaign in which he's played at least 51 games, and he should threaten for 250 hits over the course of a full 82-game season in 2021-22. Toss in double-digit goals and roughly 20-25 points and Crouse makes for a decent late-round fantasy play depending on your league's settings.
Crouse took a step forward in 2019-20, matching his 25-point output from the year before in 15 fewer games. The 11th overall pick from 2015 also brought plenty of his trademark physicality with 201 hits in 66 contests. He's grown into a solid third-line role with the Coyotes, although last season's success may have largely been a product of his unsustainable 13.8 shooting percentage. The 23-year-old winger should be able to push for 30 points and 200 hits over a full season, giving him some categorical value in deeper fantasy formats. Expectations shouldn't be too high, as Crouse is still expected to only play middle-six minutes in 2020-21.
Crouse's production spiked with 25 points and 288 hits in 81 games in 2018-19. The lofty hit total ranked second in the league, trailing only Ryan Reaves. A first-round pick from 2015, Crouse's offense has been slow to develop in three years. He still skated an average of 12:57 last year -- bottom-six minutes, but that average ticked up to 14:22 from the start of February. Crouse received a three-year contract in the summer, and he'll have to continue improving to have a larger role with the Coyotes. He could get first-line minutes to start this season, and a role on the wing opposite Phil Kessel would do wonders for Crouse's value. If he can stick in that spot, the 22-year-old might enjoy his first 40-point campaign, although it'll be his elite hit numbers that sustain his fantasy relevance in deeper formats.
Crouse doesn't qualify as a modern-day goon since he possesses decent puck skills for a power forward. Easily one of Arizona's biggest line defenders (6-foot-4, 220 pounds), “The Sheriff” has accrued six goals, seven assists, and 189 hits through 83 NHL games. Crouse played in 72 contests as a rookie, averaging 11:53 per game. However, despite cracking the Opening Night roster last season, the 11th overall pick from the 2015 draft (via the Panthers) was viewed as a spare forward, drawing into a mere 11 games before receiving a one-way ticket to AHL Tucson on Jan. 5. This next season could make or break Crouse -- he's entering a contract year with Arizona and will be under club control once the entry-level deal expires in the summer of 2019.
Crouse is a promising power forward attempting to stand out among a throng of similarly talented youngsters in Arizona. Last season, the 2014 first-round pick (via the Panthers) registered a mere 12 points in 72 games to go along with a minus-20 rating. Those rookie numbers aren't too alarming given that the 'Yotes as a team struggled on both sides of the puck, and Crouse should go a long way with more experience under his belt. He's projected to slide into the bottom-six group with Nick Cousins and Dylan Strome, a phenom regarded for his puck skills.
The 11th overall pick in the 2015 Entry Draft by the Panthers, Crouse was one of the more polarizing players in the draft. Potentially a top-five pick, Crouse slipped due to concerns that the large size advantage he enjoyed in the OHL would be negated by the increased size and speed of other players as he progressed into the professional ranks. It wasn't enough to deter the Panthers from selecting Crouse, who will be given a nine-game trial with the parent club this season before likely heading back to Kingston, his junior team. The 6-foot-4 Crouse will probably need some time to gain strength and speed, but he's an intriguing pick in dynasty leagues if you're willing to be patient, as big-bodied players tend to take longer to develop and refine their games.
More Fantasy News