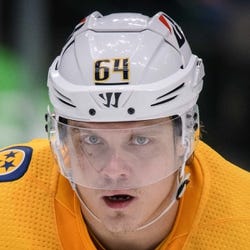 2022 Stats
G
6
A
22
PP Pts
9
+/-
-14
PIM
10
ROS Projections
G
A
PP Pts
+/-
PIM
Unlock Our Projections
2022 Fantasy Outlook
Granlund's days as a fantasy option appeared to be over after the Finnish center produced just 57 points in 114 games in 2019-20 and 2020-21 combined. Yet the reports of his demise proved to be exaggerated after Granlund finished last season with 64 points in 80 games, including a career-high 53 helpers. Granlund's 28 power-play points were the most of his career. Even in his prime years, Granlund wasn't a major fantasy asset because he never scored many goals - he's only topped 20 twice in his decade in the league. Granlund, Matt Duchene, and Ryan Johansen all had bounce-back seasons for Nashville, but the odds are against all three repeating those efforts. Granlund has a steady floor in leagues that value assists, but don't expect many goals. Read Past Outlooks
read more
#