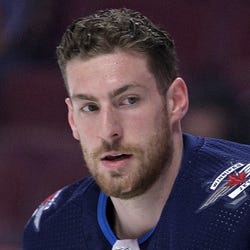 2022 Stats
G
22
A
30
PP Pts
18
+/-
9
PIM
52
ROS Projections
G
A
PP Pts
+/-
PIM
Unlock Our Projections
2022 Fantasy Outlook
Dubois' first full season in Winnipeg was good, but not great. The fact the team played poorly certainly didn't help matters any. The No. 3 overall pick from 2016 posted a new career high in goals with 28, while his 60 points were just one behind his previous high-water mark. PLD got plenty of run on the power-play (3:07 per game) and parlayed his increased role with the man advantage into 15 goals and 19 points. Dubois turned just 24 years old this past June, but there are rumors he isn't any happier in Winnipeg than he was in Columbus. He's a trade candidate if he isn't willing to sign a long-term extension with the Jets, but PLD should be good for mid-round fantasy value this coming season regardless of where he plays. Read Past Outlooks
read more
#

Calculate Stats Over Time
Just click on any two dates.
Scoring
FanDuel
DraftKings
Yahoo DFS
FantasyDraft
Head2Head
Loading Skater Game Log...
2022–23 Time On Ice Stats
Ice Time
Power Play
Short-Handed
2020–21
14:31
1:27
0:01
2020–21
15:04
1:34
0:00
2021–22
18:56
3:07
0:01
2022–23
18:27
3:27
0:05
Jets Depth Chart
Our full team depth charts are reserved for RotoWire subscribers.
Subscribe Now
Jets Power Play Depth Chart
Our full team depth charts are reserved for RotoWire subscribers.
Subscribe Now
Recent RotoWire Articles Featuring Pierre-Luc Dubois See More
NHL Bets Tonight: Expert NHL Picks for Blues vs. Jets
2 days ago
2 days ago
Dan Dobish dives into the odds for Monday's standalone NHL game between the Blues and Jets and lines up his best bets and player props for the contest.
Yahoo DFS Hockey: Monday Plays and Strategy
2 days ago
2 days ago
Chris Morgan suggests a few players to choose from Monday across a single-game slate.
DraftKings NHL: Monday Breakdown
2 days ago
2 days ago
Chris Morgan makes his picks for Monday’s single-game DraftKings slate.
FanDuel NHL: Monday Targets
2 days ago
2 days ago
Jason Chen previews Monday’s single-game slate between the Jets and Blues.
Hutch's Hockey: Best of the Rest
2 days ago
2 days ago
What might expanded All-Star Game rosters look like? Shawn Hutchinson discusses that and offers up some players who can help you before and after the NHL's marquee midseason event.
Past Fantasy Outlooks
2021
2020
2019
2018
2017
Unhappy with his situation in Columbus, Dubois requested a trade and was eventually shipped to the Jets in January in exchange for a package which included another disgruntled star in Patrik Laine. Neither man fared well in their new homes, with Dubois posting just eight goals and 20 points in 41 games. Dubois will play the entirety of the upcoming campaign at age 23 and has a track record of proven success, but the early returns from a Winnipeg perspective weren't positive. The Jets are a very top-heavy offensive team and Dubois should once again slot in as the club's No. 2 center behind Mark Scheifele. There's legitimate rebound potential here and it would be shocking if Dubois' game doesn't improve to some extent, but don't overpay for past production.
Dubois took a step back last season, totaling 18 goals and 31 helpers in 70 games after racking up 27 goals and 34 assists in 82 contests in 2018-19, but he's still just 22 years old, so there's no reason to believe he won't be able to bounce back in his fourth NHL season in 2020-21. The third overall pick from 2016 is a solid contributor across the board, as he's essentially a lock for 20-plus goals, 30-plus assists, double-digit power-play points, 100-plus hits, 50-plus blocks and 50-plus PIM over the course of a full season, and those figures should only continue to improve as the youngster begins to enter his prime over the next few campaigns. That level of cross-category contributions will make Dubois worth a mid-round pick in this year's fantasy drafts.
The third overall pick in the 2016 draft acquitted himself well as the Blue Jackets' No. 1 center, scoring 27 goals and 61 points while playing all 82 games for the second straight season. Dubois plays a physical two-way game -- he's dished triple-digit hits in each of his two NHL campaigns -- but he's proving to be much more than just a forward who can chip in some complementary offense now and then. His off-the-charts hockey IQ and all-around skill set helps make his linemates better, and he's quickly become the player coach John Tortorella trusts the most. The Columbus offense is expected to take a major step backwards this season following the departure of Artemi Panarin, but if Dubois can continue his development, the club could once again surprise.
While it's still too early to make any definitive statements on the matter, so far, Blue Jackets GM Jarmo Kekalainen looks like a genius for grabbing Dubois as the third overall pick in 2016 rather than the expected selection, Jesse Puljujarvi. Dubois had an outstanding campaign as a teenager, finishing in the top 10 in rookie scoring with 20 goals and 48 points. He showed a physical edge to his game that should only grow as he matures and gets stronger, and his two-way play was a perfect fit for John Tortorella's system. Dubois averaged nearly two minutes of ice time with the man advantage last season, and his offensive role could increase in 2018-19, especially if Artemi Panarin ends up in another uniform at some point. While sophomore slumps are rarely predictable, Dubois is as well-positioned to avoid one as any player in his cohort.
The third overall pick in 2016 started off last season slowly in the QMJHL, but racked up nine goals and 22 points in 19 playoff games and seems ready to make the leap to the pros. The Blue Jackets have a need at center, and in the long term they're hoping Dubois can develop into a strong two-way player up the middle, but as a rookie he could find himself seeing limited minutes and bouncing between the center and left wing as the 19-year-old acclimates to the NHL.
More Fantasy News