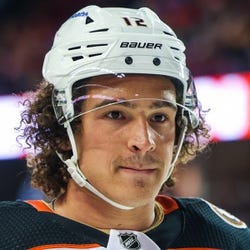 Calculate Stats Over Time
Just click on any two dates.
Scoring
FanDuel
DraftKings
Yahoo DFS
FantasyDraft
Head2Head
Loading Skater Game Log...
2022–23 Time On Ice Stats
Ice Time
Power Play
Short-Handed
2020–21
14:44
1:09
0:00
2021–22
15:17
2:08
0:00
2022–23
13:30
1:06
0:00
Capitals Depth Chart
Our full team depth charts are reserved for RotoWire subscribers.
Subscribe Now
Capitals Power Play Depth Chart
Our full team depth charts are reserved for RotoWire subscribers.
Subscribe Now
Recent RotoWire Articles Featuring Sonny Milano See More
Trade Tips: Trade Season Officially Opens
3 days ago
3 days ago
Jason Chen analyzes the fantasy impact of Bo Horvat's move to the Islanders and recommends players to target before potential deals increase their price tags.
DraftKings NHL: Thursday Breakdown
16 days ago
16 days ago
Sasha Yodashkin breaks down Thursday’s DraftKings offering, rolling with Canes netminder Freddy Andersen against Minnesota.
FanDuel NHL: Wednesday Targets
24 days ago
24 days ago
Michael Finewax is loading up on Oilers on Wednesday against Anaheim.
Hutch's Hockey: Back in the Battle
26 days ago
26 days ago
Shawn Hutchinson shares his strategy for dealing with players coming back from injury and offers up some waiver-wire additions for the week ahead.
DraftKings NHL: Thursday Breakdown
30 days ago
30 days ago
Sasha Yodashkin dives into Thursday’s DraftKings offering, rolling with plenty of Rangers against Montreal.
Past Fantasy Outlooks
2020
2018
2017
2016
2015
2014
Milano played 55 games between the Blue Jackets and the Ducks last year, producing a career-best 23 points. The 16th overall pick from 2014 never figured it out in Columbus, but he'll look to become an integral part of the Ducks' rebuild in 2020-21. Milano projects to see top-six usage for the first time in his career, which could make his track record as a 25-to-30 point player more sustainable even while being part of a lackluster offense. Fantasy managers shouldn't expect too much physicality or non-scoring production from the winger, but his scoring potential has some value in deeper formats.
The 16th overall pick in the 2014 draft has made strides with his defensive awareness and two-way game, but Milano still remains primarily an offensive player, as evidenced by his eye-popping 20.3 percent shooting in his first extended NHL action. The 22-year-old prides himself on being able to exploit any tiny chink in a goalie's armor from nearly any spot in the attacking zone, but until he earns coach John Tortorella's full trust on the other 140 feet of the rink, Milano will have a hard time climbing into a prominent spot on the depth chart.
Milano is on the brink of a substantial role in the NHL. The Blue Jackets nabbed him with the 16th overall pick in the 2014 draft, and he’s fashioned 83 points (32 goals, 51 assists) in 127 AHL games for Springfield and Lake Erie/Cleveland over the past three seasons. A fleet-footed winger with first-rate stickhandling ability, Milano has appeared in seven NHL games to date but his garnering a full-time role largely depends on how well he can tighten up his defensive play. Still, Milano remains a quality speculative pick in redraft leagues, and he’s long been keeper material.
Milano has great pedigree as the No. 16 overall pick in 2014 and a fine scorer for both the U.S. National Under-18 Team and the OHL's Plymouth Whalers in past seasons, but his first campaign in the AHL was a little slow -- 14 goals and 31 points in 54 games. He did, however, get a three-game stint with Columbus, notching his first NHL point in that span. Milano will probably spend much of this season developing in the AHL ranks, leaving his value restricted mostly to keeper formats.
Milano was a bright spot for the otherwise largely brutal Plymouth Whalers of the OHL last year, as the spectacularly talented youngster led his team in points (by 17!) despite playing only 50 of 68 regular-season contests thanks to the two facial fractures he sustained in a prospects game during the Jackets' training camp. His total of 22 goals and 68 points doesn't jump off the page by junior hockey standards, but it's legitimately possible that he was the only player on that team with an NHL future. His more immediate future will most likely be a season spent mostly with AHL Springfield, where he picked up five assists in a 10-game sample at the end of last year.
The 16th overall pick in the 2014 NHL Entry Draft, Milano's game is pure offense at this point, but he brings an electricity to that end of the rink that few prospects possess. He'll need to learn to find his way around in his own zone before he'll earn a place on a Blue Jackets' roster built to play a relentless, end-to-end style, but if he does round out his game, Milano's speed and top-shelf skill could provide a fantasy windfall.
More Fantasy News