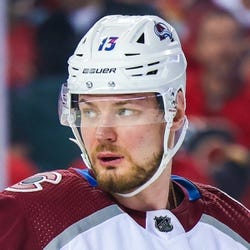 IR
Injury Ankle
Est. Return 12/7/2022
2022 Stats
G
7
A
5
PP Pts
6
+/-
1
PIM
0
ROS Projections
G
A
PP Pts
+/-
PIM
Unlock Our Projections
2022 Fantasy Outlook
Nichushkin struggled to find his way over the course of four seasons with Dallas, but a move to Colorado in 2019-20 has completely revitalized his career. He quickly developed into one of the NHL's most effective defensive forwards, and this past season he added the offense to his game. In 62 games, Nichushkin totaled 25 goals and 52 points. His previous career highs were 14 goals and 34 points, both coming in his 2013-14 rookie season. Nichushkin picked a good time for his breakout as he was scheduled for unrestricted free agency this past summer. The Avalanche paid a premium to retain him, inking the big man to a new eight-year contract with an AAV of $6.125 million. Nichushkin will have more value to Colorado than fantasy owners, but there should be enough here for him to be worth a mid-to-late round pick this coming fall. Read Past Outlooks
read more
#