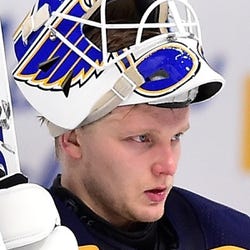 2022 Stats
W
17
L
11
SO
3
GAA
3.00
SV%
.901
ROS Projections
W
L
SO
GAA
SV%
Unlock Our Projections
2022 Fantasy Outlook
Husso was expected to serve as the backup to Jordan Binnington in St. Louis in 2021-22, but he played so well in his second NHL season -- 25-7-6 record, 2.56 GAA, .919 save percentage -- that he held onto the team's No. 1 job for a good chunk of the campaign. Set to hit unrestricted free agency this summer, Husso's rights were dealt to Detroit in July, and he ended up signing a three-year, $14.25 million contract with the team. That financial commitment should ensure that Husso opens the year as the starter for the Red Wings, making him a sneaky fantasy option considering all of the quality additions Detroit added to its roster this summer. Read Past Outlooks
read more
#

Calculate Stats Over Time
Just click on any two dates.
Scoring
FanDuel
DraftKings
Yahoo DFS
FantasyDraft
Head2Head
Loading Goalie Game Log...
2022–23 Time On Ice Stats
Red Wings Depth Chart
Our full team depth charts are reserved for RotoWire subscribers.
Subscribe Now
Recent RotoWire Articles Featuring Ville Husso See More
NHL Barometer: Risers and Fallers
Yesterday
Yesterday
This week's set of risers includes Carolina winger Sebastian Aho, who's been in elite form, scoring seven goals in his last four games.
FanDuel NHL: Tuesday Targets
8 days ago
8 days ago
Jason Chen likes the idea of a Canucks stack Tuesday against the Blackhawks.
The Goalie Report: Risers & Fallers
11 days ago
11 days ago
This week's set of rising goalies includes Frederik Andersen, who's been excellent immediately upon his return from injury.
FanDuel NHL: Tuesday Targets
15 days ago
15 days ago
Jason Chen recommends a bunch of picks for Tuesday's FanDuel slate, rolling with a Jets stack against Montreal.
DraftKings NHL: Saturday Breakdown
18 days ago
18 days ago
Chris Morgan likes Seattle’s Martin Jones on Saturday against Chicago.
Past Fantasy Outlooks
2021
2020
2018
Husso has been up and down since arriving stateside in the fall of 2016, spending time in both the AHL and ECHL. He finally got an extended run as Jordan Binnington's backup this past season with the Blues and the results weren't promising. Husso managed just a 3.21 GAA and an .893 save percentage in 17 games, despite a 9-6-1 record. Husso has one year remaining on his contract at just a $750,000 cap hit, so St. Louis will give him one more opportunity as Binnington's understudy before reassessing the situation next summer.
Husso spent the entirety of the 2019-20 season with AHL San Antonio, posting a 16-17-8 record while maintaining a 2.56 GAA and .909 save percentage through 42 appearances. The Blues clearly think the 25-year-old Finn is ready for a full-time NHL gig, as they traded Jake Allen to the Canadiens this offseason, paving the way for Husso to take over as Jordan Binnington's backup in 2020-21. Still, Husso has yet to play in an NHL contest, so St. Louis will almost certainly ride Binnington hard this year, and it wouldn't be surprising to see Husso struggle in his limited starts. He won't be worth a roster spot in standard fantasy formats.
Husso is well-regarded as the Blues' top goaltending prospect and the successor to Jake Allen. The 23-year-old excelled with AHL San Antonio last season, posting a .926 save percentage, 2.32 GAA and four shutouts. His impressive play earned him a spot on the AHL All-Rookie Team. Husso's workload was light, however, as he only played in 38 games because San Antonio was a shared affiliate (with Colorado), so the Blues couldn't control who was played. The team is now solely affiliated with St. Louis, which means Husso should get a full season as its starting goalie, making huge strides in his development. Husso is a player to watch in keeper leagues, as another solid minor-league season could vault him to the NHL sooner rather than later.
More Fantasy News