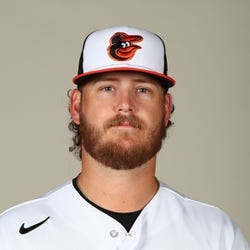 2022 Stats
W-L
9-13
ERA
3.98
WHIP
1.16
K
128
SV
0
2023 Projections
W-L
ERA
WHIP
K
SV
Unlock Our Projections
2023 Fantasy Outlook
Irvin produced an ERA below 4.00 for the first time last year, but that's mostly thanks to the fact that league-wide scoring dropped. By park-adjusted ERA-, he actually got slightly worse, going from 103 in that category in 2021 to 108 in 2022 despite improving his actual ERA by 26 points. A pitcher who can produce a below-average but passable performance across 30 starts certainly has value, both in MLB and in deeper fantasy leagues, but nothing in Irvin's record suggests he's on the verge of becoming anything more than that. He has excellent control, as his 4.9 BB% was even better than his career mark of 5.4%, but he doesn't have much more than that. The lefty's fastball averaged a mere 90.9 mph, and his 17.3 K% was poor as usual. His main appeal is the fact that he pitches for Oakland, which means both that he should have a very safe spot in the rotation and that he'll get to make half of his starts at one of the league's most pitcher-friendly parks. Read Past Outlooks
read more
League Majors
Bats L
Throws L
40 Man Yes
Height 6'4"
Weight 217
DOB 1/31/1994
Born Anaheim, CA
College Oregon
Drafted 5th Rd 2016 PHI
$Traded to the Athletics in January of 2021.

* Exit Velocity, Barrels/BBE %, Balls Hit 95+ MPH %, and Spin Rate are benchmarked against 2019 data (min 120 IP). See here for more exit velocity/barrels stats plus an explanation of current limitations with that data set.
K/BB
3.56
K/9
6.4
BB/9
1.8
HR/9
1.2
Fastball
90.6 mph
ERA
3.98
WHIP
1.16
BABIP
.280
GB/FB
1.04
Left On Base
70.3%
Exit Velocity
82.3 mph
Barrels/BBE
6.1%
Spin Rate
1902 rpm
Balls Hit 95+ MPH
23.7%
Swinging Strike
9.8%
Advanced Pitching Stats
Loading Advanced Pitching Stats...
Defensive Stats
Loading MLB Defensive Stats...
Stats Vs Today's Lineup
Want more matchup stats?
View Cole Irvin vs. Batter Stats
Loading Matchup Stats...
Athletics Depth Chart
Our full team depth charts are reserved for RotoWire subscribers.
Subscribe Now
Recent RotoWire Articles Featuring Cole Irvin
DraftKings MLB: Tuesday Breakdown
63 days ago
63 days ago
Dan Marcus focuses on the last Tuesday slate of the regular season, making his recommendations to help lead you to DFS success.
Yahoo DFS Baseball: Tuesday Picks
63 days ago
63 days ago
Mike Barner tees up Tuesday’s Yahoo offering, plugging in a Twins bat stack against the White Sox.
Weekly Pitcher Rankings: Decisions, Decisions
66 days ago
66 days ago
Todd Zola ranks starting pitchers ahead of a short week in which workloads are full of uncertainty.
MLB Picks Tonight: Expert MLB Bets for Thursday, September 29
68 days ago
68 days ago
Michael Rathburn analyzes Thursday's baseball slate and identifies his best MLB bets to target for the action. Visit RotoWire for more MLB picks all season.
Yahoo DFS Baseball: Thursday Picks
68 days ago
68 days ago
Mike Barner delivers his best picks for assembling a winning Yahoo DFS lineup Thursday.
Past Fantasy Outlooks
2022
2020
Irvin wasn't expected to take on much more than a swingman role after the A's acquired him from the Phillies last January, but the southpaw's strong performance in spring training earned him a spot in the starting rotation to begin the season. With modest off-speed offerings to go along with a four seamer and sinker that both sat in the low 90s, Irvin struck batters out at an uninspiring 16.3% clip. His other peripherals weren't much better either, as he posted a 24.4 LD%, 37.9 FB% and 10.4 HR/FB%. Despite those numbers working against him, an excellent 5.5 BB% helped him post a 4.24 ERA and 4.30 FIP across a career-high 178.1 innings. Irving's inability to overpower hitters suggests that he likely performed close to his ceiling in 2021. That being said, even if takes a step back next season, the lefty still profiles as a passable fourth or fifth starter in most big-league rotations.
With a number of the Phillies' primary rotation options underperforming, Irvin got his chance to prove that his 2.57 ERA for Triple-A Lehigh Valley in 2018 would translate to the big leagues despite mediocre stuff. In 41.2 innings, the stuff concerns won out, as the lefty stumbled to a 5.83 ERA. He couldn't strike out enough batters (17.1%) or keep the ball on the ground (34.4% groundball rate). His 7.2% walk rate was good, but not at the elite level necessary to make up for those deficiencies. With a fastball that averaged less than 90 mph and no above-average secondary weapons, it's hard to see Irvin making a particularly strong push for the fifth starter spot this season, as good control can only get a pitcher so far on its own. Lefties managed a .935 OPS off of him, so if he does move to the bullpen, it may only be in a mop-up role. There's not much here barring a sudden repertoire change.
More Fantasy News