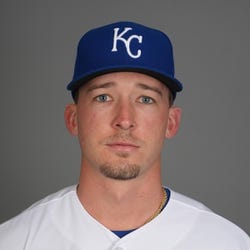 2022 Stats
AVG
.240
HR
5
RBI
18
R
14
SB
0
2023 Projections
AVG
HR
RBI
R
SB
Unlock Our Projections
2023 Fantasy Outlook
Atlanta dealt Waters to Kansas City for the 35th-overall pick in the 2022 draft and two low-probability prospects. At the time of the mid-July trade, Waters' stock had slipped so much that many prospectors thought the Royals overpaid. Prior to the trade, the 23-year-old switch hitter had an 83 wRC+ in 49 games at Triple-A after registering a 94 wRC+ in 103 games at that level in 2021. Something clicked after the change of scenery, as Waters hit .295/.399/.541 with seven home runs and 13 steals in 31 games for the Royals' Triple-A affiliate while almost doubling his walk rate (14.0 BB%, up from 7.6%). He got a well-deserved promotion to the majors in late-August and hit .240/.324/.479 with five home runs, an 11.0 BB% and a 36.7 K% in 109 plate appearances while playing all three outfield spots. There is no projection or expected statistic that supports that level of play for Waters heading into 2023, but the Royals' depth chart portends that he will get plenty of work. His combination of power, speed and opportunity makes him a worthwhile consideration in deeper formats. Read Past Outlooks
read more
RANKSFrom Preseason
#

* Exit Velocity and Barrels/PA % are benchmarked against 2019 data (min 400 PA) and Hard Hit Rate is benchmarked against last season's data (min 400 PA). See here for more exit velocity/barrels stats plus an explanation of current limitations with that data set.
BB/K
0.30
BB Rate
11.1%
K Rate
37.0%
BABIP
.353
ISO
.240
AVG
.240
OBP
.324
SLG
.479
OPS
.803
wOBA
.350
Exit Velocity
84.1 mph
Hard Hit Rate
32.1%
Barrels/PA
6.5%
Expected BA
.195
Expected SLG
.376
Sprint Speed
24.7 ft/sec
Ground Ball %
48.2%
Line Drive %
17.9%
Fly Ball %
33.9%
Prospect Rankings History
Advanced Batting Stats
Loading Advanced Batting Stats...
Additional Stats
Games By Position
Defensive Stats
Loading Games Played by Position...
Loading MLB Defensive Stats...
Batted Ball Stats
Loading Batted Ball Stats...
Stats Vs Upcoming Pitchers
Want more matchup stats?
View Drew Waters vs. Pitcher Stats
Loading Matchup Stats...
Royals Depth Chart
Our full team depth charts are reserved for RotoWire subscribers.
Subscribe Now
Recent RotoWire Articles Featuring Drew Waters
NFBC Main Event: Fever Dream, Chapter 5
62 days ago
62 days ago
Ryan Rufe walks us through the final few weeks of his first foray into the NFBC Main Event.
FanDuel MLB: Wednesday Targets
63 days ago
63 days ago
Chris Morgan looks over Wednesday's slate and notes that Shohei Ohtani adds some star power on the mound to the final day of the regular season.
AL FAAB Factor: Waiver Pickups of the Week
66 days ago
66 days ago
Erik Siegrist provides a final look at available AL free agents for the 2022 season as Drew Waters looks to establish himself ahead of 2023.
FanDuel MLB: Friday Targets
68 days ago
68 days ago
With the Mariners on the brink of clinching their first postseason berth since 2001, Chris Bennett is recommending plenty of their bats against Oakland on Friday.
AL FAAB Factor: Waiver Pickups of the Week
80 days ago
80 days ago
Erik Siegrist looks over the available talent in the AL as Carlos Santana tries to power the Mariners into the playoffs.
Past Fantasy Outlooks
2021
2020
2019
2018
Still blessed with plus speed, above-average power and exit velocities that suggest he could eventually develop plus power, Waters has exciting fantasy-relevant tools and just turned 22 in December. He finished 2019 with a 36.1 K% over 26 games in his first exposure to Triple-A pitching as a 20-year-old and also had 14 strikeouts in 28 at-bats during big-league spring training in 2020, so it's been a while since he had sustained success in official games. Waters excelled at Double-A in 2019 (144 wRC+) despite playing half his games in a very pitcher-friendly park (Mississippi). The switch hitter reportedly focused on his right-handed swing (.664 OPS vs. LHP in 2019) along with improving his plate discipline while at the alternate training site. Waters projects as a plus defender in an outfield corner and should make his MLB debut this summer whenever a spot opens up.
An athletic switch hitter who laces line drives to all fields and utilizes plus speed on the bases, Waters established himself as a top-10 prospect in his age-20 season. The ballpark at Double-A Mississippi is extremely pitcher-friendly, so while he hit just five home runs, his 35 doubles and nine triples in 108 games tell a more complete story. He was the youngest qualified Southern League hitter yet ranked third on the circuit with a 144 wRC+. It was a mixed bag after his late-season promotion to Triple-A (good: walks, line drives; bad: strikeouts, lack of power) but he was also the youngest hitter in the International League. It was impressive that he made it there at all. The Braves don't need him in Atlanta early on, so his 2020 could mirror Austin Riley's 2019. If he makes the necessary adjustments, he will get the call and has the tools (20-20 upside) to be a difference maker once he is up.
It was known before the 2017 draft and heading into last season that Waters had the potential to be a plus runner with plus raw power, but his ability to hit for a high average was a complete unknown. That aspect of his game is still a bit of an unknown, as he has not yet faced upper-level pitching, but after hitting .293 with a manageable 21.1 K% across stops at Low-A and High-A, he looks much more likely to be a five-category contributor in time. A switch hitter, Waters was much more effective against righties last season (.883 OPS as LHB, .657 OPS as RHB), although those splits flipped in a tiny sample in 2017. He walked just 29 times in 498 PA (5.8 BB%), operating with an aggressive approach early in the count. While he can survive with his current approach, increased selectivity would up his ceiling, especially as he faces more advanced pitching. Waters can handle all three outfield spots, has 20/20 potential and could reach the majors in 2020.
A switch-hitter who should remain so as he moves up the ladder, Waters is a toolshed who is one of the top-15 prep position players from the 2017 draft class. The Braves were able to keep the Georgia product in state with a $1.5 million signing bonus after selecting him with the 41st overall pick. He does damage from both sides of the plate, thanks to plus bat speed that should allow him to eventually tap into 25-plus homer power as he grows into his 6-foot-2, 183-pound frame. Waters is a plus runner, but it remains to be seen how long he holds that speed. After dominating in a brief run in the Gulf Coast League (189 wRC+, .224 ISO), Waters received a promotion to the Appalachian League, where pitchers were able to routinely exploit him with breaking balls (35.5 percent strikeout rate). Improving his pitch recognition will be crucial in order for him to hit for a high enough average to profile as an everyday player.
More Fantasy News