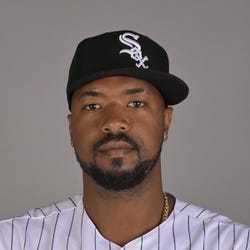 2022 Stats
AVG
.295
HR
16
RBI
54
R
40
SB
0
2023 Projections
AVG
HR
RBI
R
SB
Unlock Our Projections
2023 Fantasy Outlook
In a season where we saw offense decline as a whole across the league, Jimenez had a chance to shine at the plate in what was a loaded lineup on paper in Chicago. Like many things on the southside, things worked out poorly and Jimenez played in just 84 games on the season. The .295/.358/.500 slash line with 16 homers and 54 RBIs in essentially half a season shows what the young man is capable of when his body and mind are in sync. We should be thankful he did not injure himself in Spring Training with silly stunts, but the hamstring injury in mid April kept him out until early July. Once he shook off the rust, he hit .323/.391/.558 in the second half with 14 of the 16 homers. We do not know what baseball awaits us in 2023, but we do know that this young man has all the potential in the world even if we have yet to see it over the course of a full major league season. Read Past Outlooks
read more
RANKS
#