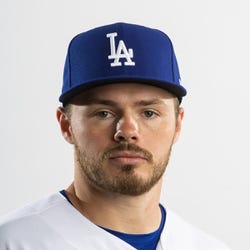 2022 Stats
AVG
.284
HR
6
RBI
42
R
63
SB
7
Rest-of-Season Projections
AVG
HR
RBI
R
SB
Unlock Our Projections
2022 Fantasy Outlook
What an up-and-down season for Lux. He started the season on the injured list (wrist) and then returned to part-time at-bats, sitting against lefties. Then in July, he hurt his hamstring and missed about a month. After that, he got demoted for a couple weeks. Finally, Lux was recalled to play the outfield and was on fire to end the season (.360/.467/.500 over the final month). He's played in three different seasons and hasn't even reached 162 games played. In 532 career PA, he has 12 homers, seven steals and a .233 average. Nick Solak had similar numbers in 2021. The 23-year-old Lux has several ways to improve to take the next step forward. He could air out more hits by dropping his 47.2 GB%. Tapping into more power would push up his 8.8% HR/FB. Finally, he could start hitting lefties (.499 OPS vs. LHP, .735 OPS vs. RHP), like he did as a prospect. Don't count on that all happening right away. Read Past Outlooks
read more
RANKSFrom Preseason
#253
ADP
#

* Exit Velocity and Barrels/PA % are benchmarked against 2019 data (min 400 PA) and Hard Hit Rate is benchmarked against last season's data (min 400 PA). See here for more exit velocity/barrels stats plus an explanation of current limitations with that data set.
BB/K
0.52
BB Rate
10.3%
K Rate
19.9%
BABIP
.350
ISO
.128
AVG
.284
OBP
.356
SLG
.412
OPS
.768
wOBA
.340
Exit Velocity
87.9 mph
Hard Hit Rate
27.9%
Barrels/PA
4.3%
Expected BA
.252
Expected SLG
.379
Sprint Speed
23.8 ft/sec
Ground Ball %
48.4%
Line Drive %
22.4%
Fly Ball %
29.2%
Prospect Rankings History
View Complete Gavin Lux Prospect Ranking History
Advanced Batting Stats
Loading Advanced Batting Stats...
Additional Stats
Games By Position
Defensive Stats
Loading Games Played by Position...
Loading MLB Defensive Stats...
Batted Ball Stats
Loading Batted Ball Stats...
Stats Vs Upcoming Pitchers
Want more matchup stats?
View Gavin Lux vs. Pitcher Stats
Loading Matchup Stats...
Dodgers Depth Chart
Our full team depth charts are reserved for RotoWire subscribers.
Subscribe Now
Recent RotoWire Articles Featuring Gavin Lux
Collette Calls: Shifting Expectations
8 days ago
8 days ago
Jason Collette examines a handful of spray charts in search of hitters who will particularly benefit from the shift ban.
The Z Files: Raking Since the Break
45 days ago
45 days ago
Todd Zola looks at players who have been putting a hurting on the ball since the All-Star break as Matt Chapman's results continue to lag behind his batted-ball profile.
DraftKings MLB: Sunday Breakdown
47 days ago
47 days ago
Chris Morgan has selected a trio of Cubs against Justin Dunn and the Reds.
Yahoo DFS Baseball: Saturday Picks
48 days ago
48 days ago
With Anibal Sanchez set to start for the Nationals, Chris Morgan is eying a few Padres to rack up some stats.
NL FAAB Factor: Waiver Pickups of the Week
61 days ago
61 days ago
With only a couple days before the trade deadline, Jan Levine checks out a few NLers who could benefit from upcoming transactions.
Past Fantasy Outlooks
2021
2020
2019
2017
What a disappointing season for Lux. Considered a top prospect and having performed capably enough in his 23-game debut in 2019, the young infielder appeared set for a significant role in one of the strongest lineups in the league and was drafted as such for most of the offseason, despite the occasional whisper that his role and even roster spot were hardly secure. As it turns out, a consequence of the Dodgers having one of the league's best lineups is that they didn't need to give many at-bats to unproven youngsters, no matter how talented. Lux failed to crack the Opening Day roster and went on to receive just 69 plate appearances over 19 games. The Dodgers claimed that was for performance rather than service-time reasons, something his .175/.246/.349 line backs up. Lux's talent is presumably still there, but role and readiness questions remain, and the depths of his struggles add new risk to his profile.
In 2018, Lux proved to have one of the best hit tools in the minors, and in 2019 he grew into plus power and made his big-league debut in September. He logged a 31.5 Hard% in the minors (good for a 21-year-old middle infielder) and 52.9 Hard% in the majors (elite) while spraying line drives to all fields. An above-average runner, Lux played through a hamstring injury, which limited him to 16 stolen-base attempts after attempting 21 in 2018. He could pilfer 15 bases with good health as a rookie. Lux can handle shortstop but is a better fit at second base. While his strikeout rate spiked from 19.5% at Double-A and Triple-A to 29.3% in his MLB debut, his 20.9 O-Swing% would have been the fourth-best mark among qualified hitters, so strikeouts shouldn't be a major issue over his first full season. He is good at everything that matters in fantasy and could become one of the game's top hitters in short order.
Lux cut his groundball rate from 52.7% at Low-A to 41.7% across stops at High-A and Double-A, and in the process emerged as a potential five-category middle infielder. Save for an eight-game run in the Pioneer League in 2016, his walk rates have always been north of 10% with strikeout rates below 20%, so the plate skills have always been there, and his 2018 swing change unlocked a potentially plus hit tool with at least average power. He is a good athlete with above-average speed, and while he attempted 15 fewer steals last year (22) than he did in 2017 (37), Lux should still be able to swipe double-digit bases annually early on in his big-league career. His defense at shortstop is lacking, and his arm isn’t accurate enough for third base, so a move to the keystone seems likely in the coming years. If Lux's revamped swing continues to produce results in the upper levels, he would project to take over as the Dodgers' everyday second baseman in 2020.
The Dodgers made Lux their first selection of the 2016 Draft, selecting him out of Indian Trail High School in Wisconsin, a state not typically known for producing MLB talent. He is also one of just three position players taken by the Dodgers in the first round since 2004. Initially committed to play for Arizona State, the left-handed hitting shortstop decided to sign with the Dodgers for $2.3 million and displayed his talents well enough in rookie ball, hitting .296/.375/.399 between the Arizona and Pioneer leagues. The Dodgers are obviously well set at shortstop for the future with Corey Seager, but the 19-year-old Lux is far enough away from the majors that Seager really shouldn't be the biggest concern for his prospective dynasty league owners. Lux will likely begin 2017 at Low-A Great Lakes and work his way up from there, with High-A Rancho Cucamonga a possibility if his bat looks advanced enough. The key to his future fantasy value will be the development of at least fringe average power to go with what appears to be a strong hit tool.
More Fantasy News