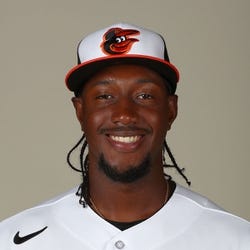 2022 Stats
AVG
.220
HR
13
RBI
50
R
61
SB
34
Rest-of-Season Projections
AVG
HR
RBI
R
SB
Unlock Our Projections
2022 Fantasy Outlook
Mateo has a perfect situation in 2022 in that he plays for a terrible club and he is out of minor-league options, so he should be given ample opportunity to show his athleticism can stick in the major leagues. Mateo has stolen nearly 300 bases in the minors with a 78% success rate with his only power coming in the year of the rabbit ball combined with playing in the PCL (19 homers in 2019). He has otherwise made a career of slashing and dashing impatiently, putting the ball into play to leverage his lightning-quick speed. He played five different positions for Baltimore last season, and comes into the season qualifying at both middle infield spots with the likelihood to earn outfield eligibility in-season. If you are looking for a late-round speed gamble, this is your guy. Ramon Urias and Kelvin Gutierrez are also out of options, making the early part of the season almost an open tryout to see which infielder sticks. Read Past Outlooks
read more
RANKSFrom Preseason
#411
ADP
#