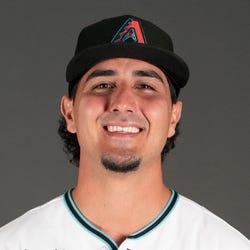 2022 Stats
AVG
.264
HR
8
RBI
51
R
64
SB
21
Rest-of-Season Projections
AVG
HR
RBI
R
SB
Unlock Our Projections
2022 Fantasy Outlook
Rojas parlayed a strong spring into regular playing time at second base. He also played right and center field along with shortstop and third base, appearing in a career-high 139 games. It would have been more, except Rojas missed time with a dislocated pinky finger. Rojas' K% and BB% were in line with levels posted previously, but he carried a bloated .345 BABIP. Unfortunately, the underlying metrics point to at least 15 lucky hits, so expect some batting average regression. That said, Rojas could improve his contact, especially since he's not prone to chasing. He has below average power with above average, but not blazing speed. Rojas' biggest allure is lineup motility as he qualifies at second base, shortstop, and outfield. He needs volume to be mixed-league worthy and should get it, likely playing all over the diamond again. There isn't an obvious pathway to a breakout, but Rojas can be an asset. Read Past Outlooks
read more
RANKSFrom Preseason
#279
ADP
#

* Exit Velocity and Barrels/PA % are benchmarked against 2019 data (min 400 PA) and Hard Hit Rate is benchmarked against last season's data (min 400 PA). See here for more exit velocity/barrels stats plus an explanation of current limitations with that data set.
BB/K
0.55
BB Rate
10.9%
K Rate
19.7%
BABIP
.320
ISO
.113
AVG
.264
OBP
.345
SLG
.376
OPS
.722
wOBA
.322
Exit Velocity
88.8 mph
Hard Hit Rate
30.0%
Barrels/PA
2.7%
Expected BA
.238
Expected SLG
.354
Sprint Speed
23.8 ft/sec
Ground Ball %
41.9%
Line Drive %
22.9%
Fly Ball %
35.2%
Prospect Rankings History
View Complete Josh Rojas Prospect Ranking History
Advanced Batting Stats
Loading Advanced Batting Stats...
Additional Stats
Games By Position
Defensive Stats
Loading Games Played by Position...
Loading MLB Defensive Stats...
Batted Ball Stats
Loading Batted Ball Stats...
Stats Vs Upcoming Pitchers
Want more matchup stats?
View Josh Rojas vs. Pitcher Stats
Loading Matchup Stats...
Diamondbacks Depth Chart
Our full team depth charts are reserved for RotoWire subscribers.
Subscribe Now
Recent RotoWire Articles Featuring Josh Rojas
Yahoo DFS Baseball: Sunday Picks
27 days ago
27 days ago
Chris Morgan offers his top Yahoo DFS plays for Sunday's slate, with Carlos Rodon looking worthy of a high price despite a tough matchup against the Phillies.
Yahoo DFS Baseball: Saturday Picks
35 days ago
35 days ago
Chris Morgan is selecting a few Yankees hitters against Adam Oller and the A's.
DraftKings MLB: Tuesday Breakdown
39 days ago
39 days ago
Dan Marcus sets the tone for Tuesday's monster 15-game slate, recommending Mariners ace Robbie Ray against visiting Washington.
The Z Files: Raking Since the Break
46 days ago
46 days ago
Todd Zola looks at players who have been putting a hurting on the ball since the All-Star break as Matt Chapman's results continue to lag behind his batted-ball profile.
Past Fantasy Outlooks
2021
2020
The ability to play all over the diamond, along with expanded rosters to open the 2020 campaign, resulted in Rojas making the Opening Day roster despite poor performances at the plate in spring training and summer camp. He only appeared in one game, fanning in his only plate appearance before the Diamondbacks sent Rojas to their alternate training facility. He was recalled Sept. 1 and played in 16 of the next 19 games before lower-back inflammation mercifully ended his season. Rojas was excellent at the Double- and Triple-A levels in 2019, but that's less impressive considering he was 25 years old. While it's encouraging that Arizona wanted to see Rojas down the stretch, he failed to take advantage. He has stolen-base appeal, but not enough to occupy a mixed-league roster spot unless he has a big spring training, and even then, there is no obvious position for Rojas to play.
Rojas was part of the four-prospect haul Arizona received for sending Zack Greinke to Houston at the trade deadline. He is a jack of all trades defensively, and could add second-base eligibility in season. The power he showed at Double-A and Triple-A didn't carry over in the big leagues, but he was able to maintain a high walk rate (11.5 BB%). After sporting a 14.8 K% at Triple-A, he struggled making contact at the big-league level (26.1 K%) after getting promoted in August. While that is not unusual for a prospect seeing MLB pitching for the first time, it's worth noting that Rojas was already 25 years old. His minor-league steals totals oversell his pure speed, but he is an above-average runner and attempted six steals in 157 big-league PA. If he earns more than a bench role in his first full season with Arizona, he could steal double-digit bases with double-digit homers.
More Fantasy News