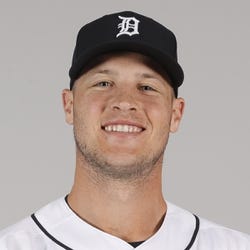 2022 Stats
W-L
2-3
ERA
3.43
WHIP
1.17
K
48
SV
0
2023 Projections
W-L
ERA
WHIP
K
SV
Unlock Our Projections
2023 Fantasy Outlook
It took a while, but Manning finally started to tap into his potential at the MLB level a bit in 2022. The righty started the year in the big-league rotation but only made two appearances before shoulder and biceps injuries put him on the shelf until August. By the end of the year, he logged only 63 innings across 12 starts, though he did manage a solid 3.43 ERA and 1.17 WHIP. It's hard to draw too many conclusions from the smaller sample size, but it was a step forward after Manning posted a 5.80 ERA and 1.51 WHIP across 85.1 innings as a rookie in 2021. He's not really missing bats so far, with a career 6.37 K/9, so it remains to be seen just how successful Manning can be in the majors. For now, just staying healthy should be his top goal after dealing with injuries the past few years. Manning will only be 25 when the 2023 season begins, so there is room for some growth if he can stay on the field. Read Past Outlooks
read more
RANKSFrom Preseason
#