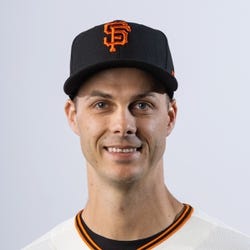 * Exit Velocity, Barrels/BBE %, Balls Hit 95+ MPH %, and Spin Rate are benchmarked against 2019 data (min 30 IP). See here for more exit velocity/barrels stats plus an explanation of current limitations with that data set.
K/BB
2.13
K/9
5.8
BB/9
2.7
HR/9
0.4
Fastball
83.3 mph
ERA
3.57
WHIP
1.27
BABIP
.299
GB/FB
2.48
Left On Base
67.5%
Exit Velocity
77.5 mph
Barrels/BBE
2.6%
Spin Rate
2094 rpm
Balls Hit 95+ MPH
20.6%
Swinging Strike
8.4%
Advanced Pitching Stats
Loading Advanced Pitching Stats...
Defensive Stats
Loading MLB Defensive Stats...
Stats Vs Today's Lineup
Want more matchup stats?
View Tyler Rogers vs. Batter Stats
Loading Matchup Stats...
Giants Depth Chart
Our full team depth charts are reserved for RotoWire subscribers.
Subscribe Now
Recent RotoWire Articles Featuring Tyler Rogers
Closer Encounters: 2022 Saves in Review, Part 1
55 days ago
55 days ago
Ryan Rufe recaps this past season's saves landscape. Just how many teams preferred closer committees over the conventional approach?
The Z Files: Sometimes, Crime Does Pay
200 days ago
200 days ago
Todd Zola examines the league-wide stolen-base environment and identifies some speedy players who could be valuable as streaming options, including Andres Gimenez.
Closer Encounters: Leveraging WPA & gmLI to Identify Potential Closers
223 days ago
223 days ago
Ryan Rufe analyzes applies a couple of advanced stats to analyze bullpens across the league. Is it time to give up on Jake McGee in San Francisco?
Closer Encounters: Clarity, Chaos in First Week
236 days ago
236 days ago
Ryan Rufe analyzes what we learned about closer situations in the first week of baseball, including how southpaw Taylor Rogers is fitting in in San Diego.
Past Fantasy Outlooks
2022
2021
2020
Rogers was a high-leverage superstar for San Francisco last season, posting seven wins, 13 saves and 30 holds across his 80 appearances. He posted the sixth-lowest K/9 among qualified relievers (6.1), but had one of the best walk rates (1.4 BB/9) and his 85.4-mph average exit velocity was in the top 3% of the league. Rogers induced plenty of ground balls (57.6% GB%) and his slider (42.8% usage) held opposing hitters to a .126 batting average and .182 xWOBA. While he proved he's more than capable of handling closing duties, he was much more effective in the eighth inning (1.24 ERA) than he was in the ninth (5.24 ERA). As a result, Rogers isn't likely to see as many saves chances in 2022, especially with Camilo Doval and Jake McGee in the fold, but he should still rack up plenty of holds in leagues that reward them.
After impressing the Giants late last season, Rogers was tabbed as a possible late-game candidate, able to fill multiple roles. July was not kind to Rogers as he ended the month with a 20.25 ERA and 2.75 WHIP. Things then came together as the sidewinding righty posted a 1.88 ERA and 1.08 WHIP the rest of the way, fanning 25 in 24 frames with just two walks. Normally, an 82.5-mph sidearm fastball and 71.4-mph frisbee slider from a right-hander are more effective against righty swingers, but Rogers has logged reverse splits in his short MLB career. He's only thrown 45.2 MLB innings, but Rogers has demonstrated the ability to induce a plethora of weak groundballs. It's always a risk trusting a pitcher whose fastball wouldn't warrant a ticket on most interstates, but it's apparent San Francisco has confidence in Rogers. He merits consideration, especially in formats rewarding holds.
The brother of Twins closer Taylor Rogers, Tyler has a funky arm slot and submarine delivery. He does not throw a pitch that averages more than 82 mph, yet Rogers was able to work his way up the bullpen hierarchy rather quickly in San Francisco and even earned himself five holds following his late-August callup. A 26th-round pick in 2013, Rogers has been developed as a reliever from Day 1. His numbers at the lower levels were strong, but Rogers hadn't had a K-BB rate over 14% from 2016-19 before his run with the Giants (18.6%). Indeed his 4.3 BB% seems ripe for regression given his track record, but with his delivery, Rogers induced a ton of groundballs (69.4 GB%) and most of those were weak dribblers. Rogers allowed just an 83.5 mph average exit velocity and not a single barrel among 50 batted-ball events. The swing-and-miss dominance is lacking, but the batted-ball numbers bode well for continued success.
More Fantasy News