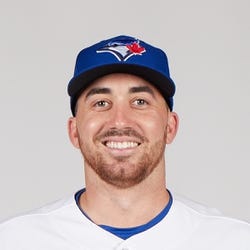 2022 Stats
W-L
3-10
ERA
5.18
WHIP
1.51
K
90
SV
0
2023 Projections
W-L
ERA
WHIP
K
SV
Unlock Our Projections
2023 Fantasy Outlook
Thompson threw a career-high 121.2 innings in 2022 after being traded from Miami to Pittsburgh in the offseason. His results were volatile, which was predictable given his contact-heavy profile -- he has only an 18.2 percent strikeout rate across 196.2 career innings. Despite managing to hold opponents to a reasonable 6.4 percent barrel rate while inducing a 45.3 percent groundball rate, Thompson served up 1.4 HR/9. Though he stuck in the rotation most of the season, Thompson was forced to the bullpen by mid-August and piggybacked with as assortment of young arms in the organization. Pittsburgh opted to move on from Thompson and sent him to Toronto, and the change in scenery is unlikely to help his chances of seeing regular starts. The righty could make some spot starts, but his likely role with the Blue Jays, assuming he's up with the big club, is likely to be that of a long reliever. Read Past Outlooks
read more
League Majors
Bats R
Throws R
40 Man Yes
Height 6'7"
Weight 230
DOB 10/23/1993
Born Burleson, TX
College Texas-Arlington
Drafted 5th Rd 2014 CWS
$Signed a one-year contract with the Pirates in March of 2022.

* Exit Velocity, Barrels/BBE %, Balls Hit 95+ MPH %, and Spin Rate are benchmarked against 2019 data (min 120 IP). See here for more exit velocity/barrels stats plus an explanation of current limitations with that data set.
K/BB
1.96
K/9
6.7
BB/9
3.4
HR/9
1.4
Fastball
92.3 mph
ERA
5.18
WHIP
1.51
BABIP
.320
GB/FB
1.62
Left On Base
68.6%
Exit Velocity
82.8 mph
Barrels/BBE
3.7%
Spin Rate
2355 rpm
Balls Hit 95+ MPH
27.5%
Swinging Strike
10.7%
Advanced Pitching Stats
Loading Advanced Pitching Stats...
Defensive Stats
Loading MLB Defensive Stats...
Stats Vs Today's Lineup
Want more matchup stats?
View Zach Thompson vs. Batter Stats
Loading Matchup Stats...
Blue Jays Depth Chart
Our full team depth charts are reserved for RotoWire subscribers.
Subscribe Now
Recent RotoWire Articles Featuring Zach Thompson See More
Todd's Takes: Putting a Bow on the Moves
13 days ago
13 days ago
Todd Zola tackles the remainder of the winter's most fantasy-relevant moves, including the swap which sent Pablo Lopez to Minnesota and Luis Arraez to Miami.
Weekly Pitcher Rankings: Patience is a Virtue
150 days ago
150 days ago
Todd Zola ranks this week's starting pitchers, with the widely-available Bailey Falter's two-start week earning him a top-30 spot.
Weekly Pitcher Rankings: Back to Nola
157 days ago
157 days ago
Todd Zola ranks this week's starting pitchers, with Aaron Nola taking the top spot thanks to a pair of easy divisional matchups.
Todd's Takes: Arsenals and Angles
159 days ago
159 days ago
Todd Zola analyzes pitchers with limited arsenals before tackling the most interesting fantasy fall-out from Wednesday's schedule.
2022 Fantasy Outlook
Thompson was a slow mover through both the White Sox and Marlins organizations, though he managed to make his big-league debut as a 27-year-old in 2021. After getting the call in June, Thompson served as a traditional starter for his first 13 games and performed well, posting a 3.16 ERA while limiting opposing hitters to a .209 batting average and .365 slugging percentage. Despite that success, he was moved to the bullpen for the final month of the season as the Marlins gave looks to higher-upside players such as Jesus Luzardo and Edward Cabrera. The end result was a 3.24 ERA, though his 12.1 K-BB% suggests results that more closely resemble his 4.58 SIERA could be in order. Thompson appeared to be blocked from a rotation role in Miami, though he was dealt to the Pirates in late November and could get another opportunity as a starter as a result.
More Fantasy News