This article is part of our The Stats Room series.

The Red Zone. It's that mystical area Andy Reid-led teams go to kick field goals. Maybe not this year, but when teams get within 20 yards, the scoring chances for everyone goes up. In fantasy football, do the skills of some wide receivers play up in the smaller field? Do they get targeted more often? Less often? While not exploring every avenue, a red zone "talent" doesn't seem to exist. It's time to find out why.

There is a ton of ways to approach this subject, so for now I've just created a baseline to be used for future comparisons. The biggest approach change I noticed was why, specifically, 20 yards. Why not 25 or 10 yards? There are a ton of one-offs to be explored, but I had to pick a lane and, for now, it is at 20 yards to the goal line. Besides differences in yardage, let me know in the comments any areas readers want to be examined.

It's time to get started. For those who don't like heavy number analysis, jump to the conclusions. Otherwise, hold on for a ton of wide receiver red-zone data.

Lots and Lots of Numbers

To start with, here are the league-wide numbers for the red zone over the years, starting with pass versus rushing attempts in the red zone. 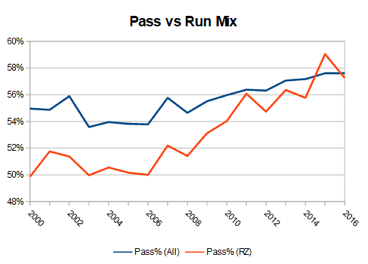 Starting about 2006, the league moved from being near 50-50 with its run-pass mix in the red zone to closer to the full-field average. 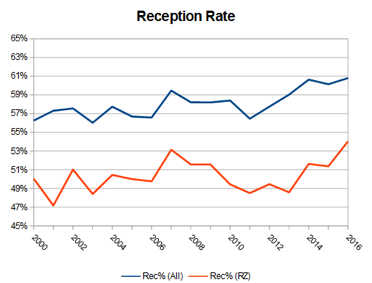 Defenses tighten with less field to cover and limit the receptions for about 8 percentage points. While the red zone reception rate has climbed the last few season, it is in line with an overall increased reception rate.

Now that the league numbers are out of the way, here are the physical traits of the wide receivers targeted in the red zone compared to the whole field.

For the overall league, wide receivers targeted in the red zone are bit taller, heavier and experienced. But not by much. I'm a little surprised with lack of height being a factor.

Maybe the height is a major factor in completion percentage. To find out, here are the reception rates for heights along with the differences. 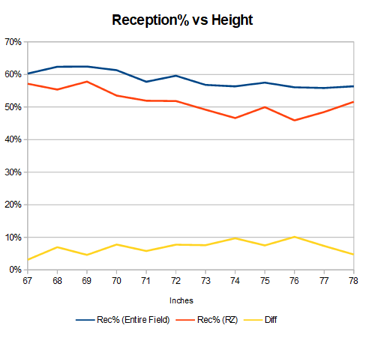 I had to recheck my numbers a couple times to see if they were right. They are. The taller the wide receiver, the more his completion rate drops in the red zone. The discrepancy could be from defenses targeting the taller receiver. Also, teams could be throwing jump balls to taller guys that are harder to complete. Finally, they might just be getting targeted inside the 10. There's more to examine here, but I will move onto one more test.

I have information from pre-draft scouting combines, including vertical jump and arm length, but it's limited. For players who had both factors, which I added to an adjusted height, I found their reception rates. 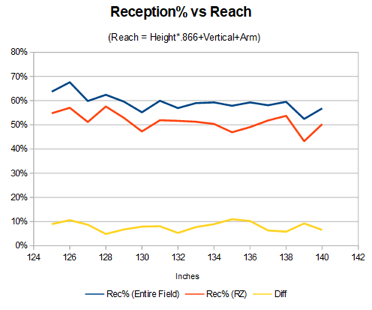 Besides reception rate, how often a receiver is targeted is a key factor. Dealing with targets is a little tougher to work through. I'm going with the percentage of red-zone targets to normal targets starting with players of different heights. If a player sticks out in the red zone, his target rate will ideally jump. 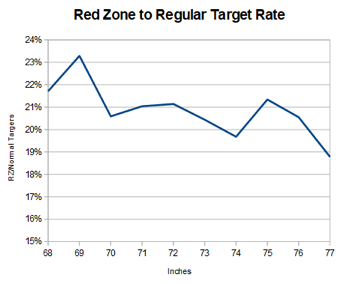 Taller receivers get fewer targets than normal in the red zone. They could be drawing the attention of the defense's top players or they are just decoys. No matter what, this idea goes against the conventional wisdom.

Instead of just height, maybe total reach is the key factor. Here are the red zone over normal targets rates. 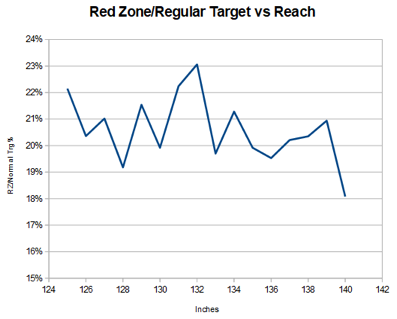 If a one stares hard enough, there may be a parabolic peak at 132 inches. I just see the value jumping around 20 to 21 percent. Height and reach, at the league-wide level, do not seem to increase a wide receiver's chances for red zone targets. I even tested the ratio of reach to height to see if teams targeted their short, high jumpers. Maybe the other team wasn't prepared for these exception reachers. Nope, almost a straight line right above 20 percent.

Just because there is not an ideal candidate for being a red-zone target, it doesn't mean it isn't possible for individual receivers sticking out in the red zone.

For a reference, here are the red zone-to-normal-target rates for all players with 32 season targets and at least one red-zone target. 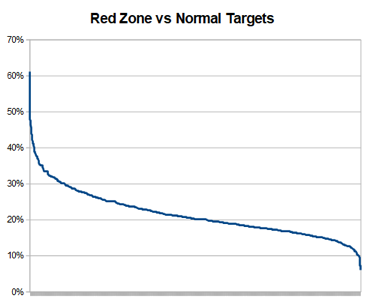 While the average ratio just above 20 percent, the distribution varies quite a bit. Now for the big question – are targets predictable from season to season?

I matched up all the player seasons used to make the above graph and determined if a wide receiver will continue to be a red-zone target. Here are the year-to-year target rates. 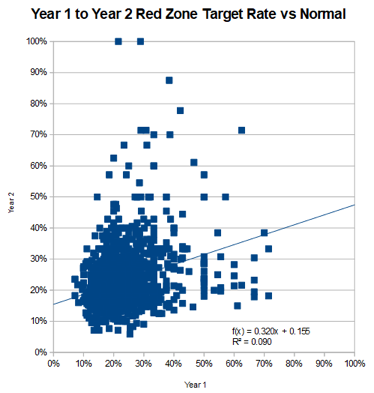 Simply, the results aren't good. A small matched-seasons trend exists, but the R-squared is just 0.09, showing little year-to-year correlation. If I increase the target threshold to remove the outliers (100 min. targets), the correlation gets worse, dropping to 0.03. I cut-and-diced the data several ways with no improvements.

In the red zone, there seems to be no ability to predict targets for wide receivers. If a wide receiver is talented enough to be great with the whole field to work with, he continues his production into the red zone. At least defined with the 20 yards to go.

In the traditional sense, there is no such measurable concept as a red-zone wide receiver. They can't sky over their opponents for more targets and completions. They show no season-to-season correlation with this supposed skill. As for now, nothing points to a red-zone ability. That doesn't mean one doesn't exist. It could be within 10 yards. It could only be in-season. I see myself digging into this topic for a few more articles. As always, let me know if you have any questions.