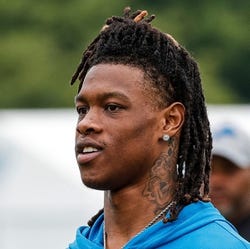 NFI-R
Injury Knee - ACL
Est. Return 10/9/2022
2022 Receiving Stats
REC
0
YDS
0
TD
0
AVG
0.0
TAR
0
Rest-of-Season Projections
REC
YDS
TD
AVG
TAR
Unlock Our Projections
2022 Fantasy Outlook
Williams might've been the first WR selected in the 2022 Draft if not for his ACL tear in the national title game last season. It was a disappointing end to a phenomenal year, with Williams averaging 104.8 yards and a TD per game in his lone season at Alabama after transferring from OSU. The Lions took him 12th overall, despite the knee injury and his lack of production at OSU pre-transfer. Naturally, two of the guys who played ahead of Williams at OSU were drafted right ahead of him - Chris Olave (Saints) and Garrett Wilson (Jets). None has an ideal situation for rookie-year production, but it'll be especially difficult for Williams given the timing of his injury. It's possible he's eased into action once he returns from his stint (at least four games) on the NFL list and he may fall behind Amon-Ra St. Brown and DJ Chark when it comes to building chemistry with QB Jared Goff. On the other hand, Williams is blazing fast, young for his draft class and coming off a dominant campaign in the SEC, making it unwise to bet against him long term. Read Past Outlooks
read more
RANKS
#158.47
ADP
#