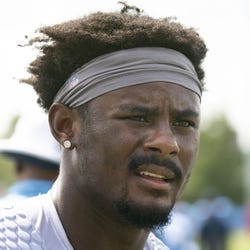 2022 Pass/Rush Stats
YDS
6
TD
0
INT
0
YDS
16
TD
0
Rest-of-Season Projections
YDS
TD
INT
YDS
TD
Unlock Our Projections
2022 Fantasy Outlook
A third-round pick in this year’s draft, Willis is a dual-threat QB with a rocket arm and elite speed for the position. It's because of those attributes that some pegged Willis as a first-rounder. He fell, though, because scouts questioned his inconsistent mechanics and processing issues, which led to inaccuracy (61.1 completion percentage) and interceptions (12) in his second of two seasons at Liberty. Willis will have time to refine those skills this season as the backup to Ryan Tannehill in Tennessee. If the rookie is forced into action, the outlook isn’t great. Not just because he needs time to develop, but because the Titans traded A.J. Brown and released Julio Jones and replaced them with Robert Woods (coming off an ACL tear), rookie Treylon Burks and TE Austin Hooper. Any hope for Year 1 fantasy value likely requires Tannehill missing time and Willis taking a bunch of carries in an extremely run-heavy offense. Read Past Outlooks
read more
RANKS
#238.37
ADP
#

QBTennessee Titans
Read More News
NFL Stats
Loading NFL Stats...
Fantasy/Red Zone Stats
See red zone opportunities inside the 20, 10 and 5-yard lines along with the percentage of time they converted the opportunity into a touchdown.
Loading Fantasy/Red Zone Stats...
Advanced NFL Stats
How do Malik Willis' 2022 advanced stats compare to other quarterbacks?
This section compares his advanced stats with players at the same position. The bar represents the player's percentile rank. For example, if the bar is halfway across, then the player falls into the 50th percentile for that metric and it would be considered average. The longer the bar, the better it is for the player.
Bad Pass %
50.0%
Avg Target Depth
5.8 Yds
Sack Rate
0.0%
Avg Receiver YAC
1.0 Yds
Receiver Drop %
0.0%
Loading Advanced NFL Stats...
2022
2022 NFL Game Log

Titans
View Full Depth Chart
This Week's Opposing Pass Defense
How does the Raiders pass defense compare to other NFL teams this season?
The bars represents the team's percentile rank (based on QB Rating Against). The longer the bar, the better their pass defense is. The team and position group ratings only include players that are currently on the roster and not on injured reserve. The list of players in the table only includes defenders with at least 3 attempts against them.

vs Raiders
Sunday, Sep 25th at 1:00PM
Overall QB Rating Against
84.1
Cornerbacks
24.2
Safeties
134.7
Linebackers
127.6
Loading Opponent Pass Defense Stats...
2022 Malik Willis Split Stats
Loading NFL Split Stats...
Measurables Review View College Player Page
How do Malik Willis' measurables compare to other quarterbacks?
This section compares his draft workout metrics with players at the same position. The bar represents the player's percentile rank. For example, if the bar is halfway across, then the player falls into the 50th percentile for that metric and it would be considered average.
Height
6' 1"
Weight
219 lbs
Hand Length
9.50 in
Arm Length
31.75 in
Recent RotoWire Articles Featuring Malik Willis
NFL Notebook Dump: Crazy Collapses, Tua Shines, Hurts Dominates + Fantasy News and Notes from Week 2
6 days ago
6 days ago
Nick Whalen recaps all of the fantasy-relevant news and notes from Week 2 in the NFL, including a statement win by the Eagles on Monday Night Football.
Job Battles: Cut Day Update
26 days ago
26 days ago
Sony Michel was a surprising cut by the Dolphins, but he might soon crash another coveted RB role rather than fade into obscurity.
NFL Cutdown Day: Fantasy Fallout after Rosters are Trimmed to 53
26 days ago
26 days ago
Michael Gallup might not be ready for Week 1, but Week 2 or 3 isn't out of the question. He avoided the PUP list, while Bills CB Tre'Davious White was less fortunate.
NFL Waiver Wire: Preseason Pickups
27 days ago
27 days ago
Kevin Payne analyzes the top waiver options for the last week of preseason, including the Titans' Malik Willis.
DraftKings NFL: Saturday Preseason DFS Preview
31 days ago
31 days ago
Sasha Yodashkin analyzes the Saturday DraftKings preseason contest as Kenneth Gainwell could get a lot of work for Philadelphia.
More Fantasy News