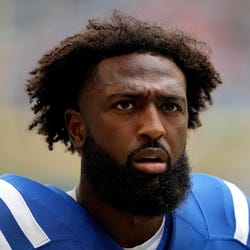 2022 Receiving Stats
REC
5
YDS
47
TD
0
AVG
9.4
TAR
8
Rest-of-Season Projections
REC
YDS
TD
AVG
TAR
Unlock Our Projections
2022 Fantasy Outlook
Campbell played just six games last season due to foot surgery, recording 10 receptions for 162 yards with a touchdown on 20 targets. It was his third consecutive injury-plagued campaign, and he's played just 15 games in three years. The 2019 second-rounder is an intriguing athlete, considering at 6-0, 208 pounds, he ran a 4.31 40 and had a 135-inch broad jump and 40-inch vertical at the NFL combine. Most players that fast and athletic are well under 200 pounds. Campbell has had glimpses where his speed has demonstrated that he could be a significant factor in the offense. This coming season, he's the leading candidate to win the Colts' slot receiver role, but he needs to show he can stay healthy for any length of time. Read Past Outlooks
read more
RANKS
#225.4
ADP
#

WRIndianapolis Colts
Read More News
NFL Stats
Loading NFL Stats...
Fantasy/Red Zone Stats
See red zone opportunities inside the 20, 10 and 5-yard lines along with the percentage of time they converted the opportunity into a touchdown.
Loading Fantasy/Red Zone Stats...
Advanced NFL Stats
How do Parris Campbell's 2022 advanced stats compare to other wide receivers?
This section compares his advanced stats with players at the same position. The bar represents the player's percentile rank. For example, if the bar is halfway across, then the player falls into the 50th percentile for that metric and it would be considered average. The longer the bar, the better it is for the player.
Air Yards Per Game
22.0
Air Yards Per Snap
0.27
% Team Air Yards
7.6%
% Team Targets
7.7%
Avg Depth of Target
7.3 Yds
Catch Rate
37.5%
Drop Rate
0.0%
Avg Yds After Catch
9.7
% Targeted On Route
11.0%
Avg Yds Per Route Run
0.64
Loading Advanced NFL Stats...
2022
2021
2020
2019
2022 NFL Game Log

vs Chiefs
Sunday, Sep 25th at 1:00PM
Overall QB Rating Against
101.6
Cornerbacks
90.0
Safeties
95.8
Linebackers
103.4
Loading Opponent Pass Defense Stats...
2022 Parris Campbell Split Stats
Loading NFL Split Stats...
Measurables Review View College Player Page
How do Parris Campbell's measurables compare to other wide receivers?
This section compares his draft workout metrics with players at the same position. The bar represents the player's percentile rank. For example, if the bar is halfway across, then the player falls into the 50th percentile for that metric and it would be considered average.
Height
6' 0"
Weight
208 lbs
40-Yard Dash
4.31 sec
Shuttle Time
4.03 sec
Vertical Jump
40.0 in
Broad Jump
135 in
Bench Press
11 reps
Hand Length
9.50 in
Arm Length
32.25 in
Recent RotoWire Articles Featuring Parris Campbell
NFL Picks: NFL Best Bets and Player Props for Week 3 at FanDuel Sportsbook
2 days ago
2 days ago
Kevin Payne identifies his best NFL bets and player props available at the FanDuel Sportsbook for NFL Week 3. Visit RotoWire for more NFL picks all season.
Target Breakdown: Week 2 WR/TE Usage Recap & Week 3 Waivers
6 days ago
6 days ago
Garrett Wilson's role is growing, and he's not alone in that regard among rookie wide receivers. Plus, there are some interesting TEs available on waivers in most leagues.
NFL Notebook Dump: Crazy Collapses, Tua Shines, Hurts Dominates + Fantasy News and Notes from Week 2
6 days ago
6 days ago
Nick Whalen recaps all of the fantasy-relevant news and notes from Week 2 in the NFL, including a statement win by the Eagles on Monday Night Football.
Weekly Rankings: Week 3 Value Meter
6 days ago
6 days ago
Will Amon-Ra St. Brown reprise this play against the Vikings in Week 3?
Gameday Injuries: Week 2
8 days ago
8 days ago
Juan Carlos Blanco reviews a loaded Week 2 injury landscape and offers the early Sunday details on the health status of key fantasy stars.
Past Fantasy Outlooks
2021
2020
2019
Campbell saw nine targets in Week 1 last season, before going down for the year early in Week 2 with a torn MCL and PCL. He's healthy at press time and will compete for a role with T.Y. Hilton, Michael Pittman and Zach Pascal. Campbell is one of the overlooked freak athletes in the league - at 6-0, 208, he ran a 4.31 40 and had a 135-inch broad jump and 40-inch vertical. Most players that fast and athletic are well under 200 pounds. Campbell's biggest issue has been health - he's suited up for only nine of a possible 32 games his first two seasons. The Colts offense could be run-heavy, but with Hilton aging and injured and Pittman not yet established, there are targets for the taking in Indianapolis.
Campbell had a forgettable rookie year due to hand, hamstring, abdominal and foot injuries, the latter of which ended his season. In seven games, he saw only 24 targets for a meager 7.1 YPC and 5.3 YPT. But last year's injury-riddled performance with Jacoby Brissett at quarterback isn't especially probative of what a healthy Campbell could do in a competent passing attack. At 6-0, 205, Campbell has average size, but he ran a scorching 4.31 40 at the 2019 combine and posted elite marks in the vertical (40 inches), broad jump (135 inches) and 20-yard shuttle (4.03), making him one of the best athletes in a deep and talented receiver class. Campbell wasn't polished as a route runner coming out of college, so for now he lacks football skills commensurate with his athletic talent, but he should improve with more experience. The Colts upgraded to Philip Rivers (albeit a declining version) this offseason, and Campbell figures to compete for targets behind T.Y. Hilton (never a target hog) with Zach Pascal and rookie Michael Pittman, i.e., there's a breakout opportunity should Campbell take the next step.
Taken with the 59th overall pick in this year's draft, Campbell has as a chance to emerge as the team's No. 3 wideout sooner rather than later. T.Y. Hilton is the team's top wideout, but he's not a target hog on the DeAndre Hopkins/Antonio Brown level. The team also brought in Devin Funchess this offseason and gave him a one-year, $10 million deal, but beyond them, the depth chart is scant. At 6-0, 205, Campbell runs a blazing 4.31 40, rare speed for a receiver of that height and weight. He also posted elite marks in the vertical (40 inches), the broad jump (135 inches) and the 20-yard shuttle (4.03), making him one of the best athletes in his class. Campbell isn't especially polished and could struggle for volume at the outset, but there's upside should the Colts get him involved once the rookie gains comfort in the offense, or alternatively, injuries hit.
More Fantasy News