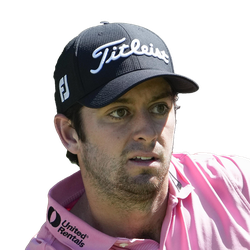 2021–22 Stats
Rank
Winnings
Winnings/Entry
Entries
Rounds
2022–23 Fantasy Outlook
Riley really became a DFS darling over the spring months after a slow start to his rookie season. After falling in a playoff at the Valspar Championship to Sam Burns, Riley had a stretch of six straight finishes of T13-or-better. He would only post one top-25 over his final seven starts, however, and fall just outside that Top-30 that qualify for East Lake. Really the only weakness here appears to be short game, as he ranked outside the top-115 in SG: Around-the-Green and scrambling. If he cleans that up a bit, Riley has the potential to take off as a sophomore because he's long, a solid iron player, and a stout putter who ranked inside the top-15 in birdie average. Read Past Outlooks
read more
Handedness Left
Country USA
Read More News
PGA Stats
Loading Golf Stats...
Tournament Results
Scoring
FanDuel
DraftKings
Loading Tournament Log...
PGA Advanced Stats
Loading Advanced Stats...
Recent RotoWire Articles Featuring Davis Riley
Weekly Preview: Sanderson Farms Championship
4 days ago
4 days ago
Denny McCarthy has fared well at Jackson Country Club, and Greg Vara expects him to come through again this week.
DraftKings PGA: Sanderson Farms Championship Picks and Strategy
4 days ago
4 days ago
A stellar result in the season opener helps Taylor Montgomery land a spot among Len Hochberg's picks to click in this week's contests on DraftKings.
Yahoo DFS Golf: Fortinet Championship Picks and Strategy
17 days ago
17 days ago
Davis Riley has been a bit quiet of late, but Bryce Danielson believes he will make some noise in this week's season-opening contests on Yahoo.
2022 Fortinet Championship Betting: Picks, Odds, Predictions and Best Bets
18 days ago
18 days ago
Ryan Pohle lists his favorite bets for the season opener and tells you why he is willing to wager on Gary Woodland winding up in the winner's circle.
Weekly Preview: Fortinet Championship
18 days ago
18 days ago
The 2022-23 PGA Tour season kicks off this week, which means there are lineups to fill and bets to be made. Find out why Greg Vara suggests going with Sahith Theegala in a number of different formats.
Past Fantasy Outlooks
2022
2020
Riley is a former junior golf prodigy, who won four consecutive state titles in Mississippi before attending the University of Alabama where he became a two-time All-American. He recorded just one top-10 in 18 starts during his first year on the Korn Ferry Tour in 2019, but Riley picked up a pair of victories in 2020-21 at the Panama Championship and the TPC San Antonio Championship at the Oaks. Riley has slipped outside the top 300 in the Official World Golf Ranking, however, failing to notch a top-10 finish since May's AdventHealth Championship.
It didn't take much time for the three-time collegiate All-American from the University of Alabama to outgrow the Korn Ferry Tour as he notched a pair of wins at the Panama Championship and TPC San Antonio Championship in 2020. The 23-year-old tallied five top-10s and nine top-25s in 16 events to finish second on the KFT's points list at the conclusion of the Korn Ferry Tour Championship. Riley also made a pair of cuts at the PGA Tour level during the fall series, placing 76th at the RSM Classic and T39 at the Sanderson Farms Championship. On the Korn Ferry Tour, he was second in birdie average and first in the all-around ranking.
More Fantasy News