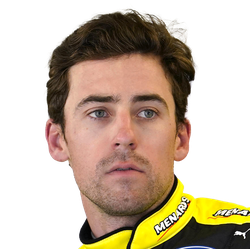 2022 Cup Stats
Points
3056
Starts
30
Wins
0
Poles
3
Top 5
9
Top 10
14
2022 Fantasy Outlook
Blaney took a few more steps in his development last season. He posted a career-best three victories and 20 Top-10 finishes. Blaney also tied a career-best mark in terms of standings finish, coming in seventh-place in the final tally. The driver of the No. 12 Ford will lose Todd Gordon as crew chief and start anew with Jonathan Hassler in 2022. That could prove to be a minor setback, especially in the early part of the season. It could take some time for the new duo to develop communication and chemistry. Blaney is still wildly talented and should continue posting strong numbers as he and his crew chief get some races under their belts. While we're very optimistic about the upcoming season, we still believe Blaney lacks the potential to challenge for the championship. He and his Penske Racing team will be among the faces just outside the top championship contending teams. Read Past Outlooks
read more
Car No. 12 Ford
Crew Chief Jonathan Hassler
Rookie Year 2013
Birth Date 12/31/1993
Born High Point, North Carolina, United States
Country UNITED STATES