Written by Jeff Stotts with Will Carroll and Dan Wade

Rotowire.com, the web's premier fantasy news and information resource, is pleased to present the 2011 Dick Martin Award. The Dick Martin Award, named for the former Minnesota Twins athletic trainer, is designed to recognize the athletic trainers and medical professionals within Major League Baseball that continually strive to improve the health of their athletes by preventing, identifying, and treating injuries.

The work of these individuals often goes unnoticed but without their hard work and dedication in the offseason, spring training, and throughout the grind of the regular season, players would be unable to play at the highest of levels. This award is based on one-year totals for days and dollars lost to injuries, as well as a proprietary formula known as Injury Cost.

It's our privilege to present this year's award to the Kansas City Royals medical staff led by head athletic trainer Nick Kenney.

The award was first presented in 2004 when the Tampa Bay Devil Rays – yes, they were still the Devil Rays then – took home the inaugural trophy. Following the Devil Rays' win, the award has lived primarily in the AL and NL Central, including three years on the I-94 corridor. The past winners are:

Even though it's been the better part of a decade since some of these teams took home the award a few years ago, the previous winners are typically among the top contenders for the award. The White Sox haven't finished out of the top five since 2007, and the Rays are seldom far behind them, despite not having finished on top since 2004. Health may not be the sole determinant of success, but it is a huge part of the formula.

One of the most interesting things about the DMA is that it seems to be a leading indicator for future success. Teams like Tampa, Milwaukee, and Philadelphia followed their awards with playoff runs and more importantly, consistent runs of contention. Managing both the injuries and the payroll is one of the biggest challenges in modern baseball. By controlling this situation, the medical staffs of these teams have contributed greatly to success.

As research showed, the best staffs in the league returned as much as a full season of payroll in dollars saved from injuries. Yet at the same time, few aside from the most hardcore of fans could tell you who Herm Schneider, Roger Caplinger, or Gene Monahan are or what they do on a day to day basis. In fact, baseball has lost well over a billion dollars to injuries over the past five seasons. By saving their teams significant money and keeping talent on the field, the medical staff can often have an outsized effect on winning, in effect becoming a 'force multiplier.'

This year's winner is something of a repeat. Nick Kenney was part of the Cleveland Indians staff that won the DMA in 2007. The Ohio native came to the Royals organization in 2010 and created an immediate turnaround. While the work that the new medical staff has done hasn't fully taken hold in the three- and five-year rankings, they've been better than average and reduced the dollars lost by 28% in the first year and then another 40% off that in 2011. Dropping over 850 man-days-lost is an incredible accomplishment. Doing it so quickly makes it even more astounding. Kenney is assisted by Kyle Turner, who was plucked from the Texas organization, as well as Ryan Stoneberg (S&C) and Jeff Blum (on-staff PT.) The team physician, Dr. Vincent Key, is also new to the Royals. All in all, this new staff has created a new attitude and clearly changed the results.

This work comes at the same time as an influx of new talent, which is reminiscent of former winners in Tampa and Milwaukee. One thing that can make younger players confident is trust in their medical staff. As they see their teammates working with the ATs on prevention, it begins to build. As they see their teammates on the field rather than on the DL, confidence grows again. It's something that's very difficult to quantify or even to get players or Trainers to discuss, but stability and confidence have a very important role in how a medical staff contributes to a winning ball club. 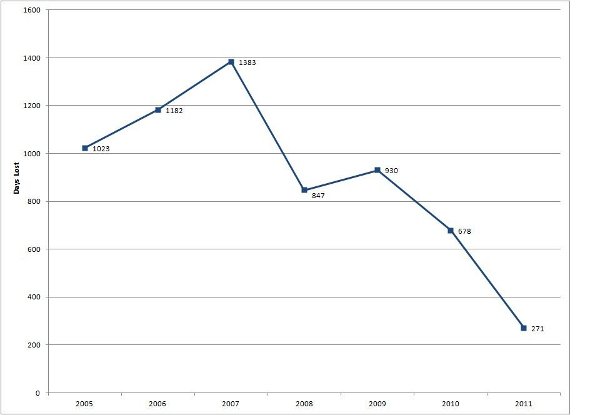 "The Royals are very honored to receive this award," Kenney said. "It is the recognition of a total team effort .In addition, our minor league athletic trainers deserve accolades for their time and effort grooming our young players in order to allow them to identify and establish healthy habits leading to injury prevention."

Again, all of us would like to congratulate Nick Kenney, his staff, and the Royals on this very deserved award. We will be presenting the trophy to Kenney during the Winter Meetings next month in Dallas. The Royals have to hope that like previous winners, they'll see other trophies and maybe a ring in the near future.

Join Our Subscriber-Only MLB Chat
Chat with our writers and other RotoWire MLB fans for all the pre-game info and in-game banter.
Join The Discussion
ABOUT THE AUTHOR