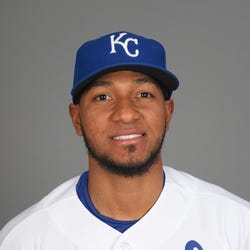 2022 Stats
AVG
.286
HR
4
RBI
15
R
24
SB
2
2023 Projections
AVG
HR
RBI
R
SB
Unlock Our Projections
2023 Fantasy Outlook
Has the ship sailed for Olivares? He was up and down between Triple-A and the majors so much in 2021 they made a rule to restrict the number of times a player can be optioned in a given season. It appeared he might finally get a long look in 2022, but Olivares was in and out of the lineup before landing on the injured list with a right quadriceps strain. He later strained his left quad, necessitating another trip to the IL. All told, Olivares played in 53 games for the Royals last season, batting a healthy .286 with four homers and two steals across 174 plate appearances. He has legitimate pop and has stolen as many as 35 bases in the minor leagues. Plus, the outfielder is still just entering his age-27 season. That being said, it's difficult to tell where he stands in the organization right now. Both Dayton Moore and Mike Matheny are gone, but that does not necessarily mean Olivares will be turned loose in an everyday role. Read Past Outlooks
read more
RANKSFrom Preseason
#

* Exit Velocity and Barrels/PA % are benchmarked against 2019 data (min 400 PA) and Hard Hit Rate is benchmarked against last season's data (min 400 PA). See here for more exit velocity/barrels stats plus an explanation of current limitations with that data set.
BB/K
0.28
BB Rate
5.7%
K Rate
20.7%
BABIP
.344
ISO
.124
AVG
.286
OBP
.333
SLG
.410
OPS
.743
wOBA
.329
Exit Velocity
89.2 mph
Hard Hit Rate
32.5%
Barrels/PA
4.6%
Expected BA
.288
Expected SLG
.433
Sprint Speed
24.2 ft/sec
Ground Ball %
46.0%
Line Drive %
24.6%
Fly Ball %
29.4%
Prospect Rankings History
View Complete Edward Olivares Prospect Ranking History
Advanced Batting Stats
Loading Advanced Batting Stats...
Additional Stats
Games By Position
Defensive Stats
Loading Games Played by Position...
Loading MLB Defensive Stats...
Batted Ball Stats
Loading Batted Ball Stats...
Stats Vs Upcoming Pitchers
Want more matchup stats?
View Edward Olivares vs. Pitcher Stats
Loading Matchup Stats...
Royals Depth Chart
Our full team depth charts are reserved for RotoWire subscribers.
Subscribe Now
Recent RotoWire Articles Featuring Edward Olivares
NFBC Main Event: Fever Dream, Chapter 5
56 days ago
56 days ago
Ryan Rufe walks us through the final few weeks of his first foray into the NFBC Main Event.
AL FAAB Factor: Waiver Pickups of the Week
74 days ago
74 days ago
Erik Siegrist looks over the available talent in the AL as Carlos Santana tries to power the Mariners into the playoffs.
AL FAAB Factor: Waiver Pickups of the Week
116 days ago
116 days ago
Erik Siegrist checks out the post-trade deadline free agent pool as Baltimore's Felix Bautista is just one of a few new potential closers in the American League.
Collette Calls: Next Man Up
129 days ago
129 days ago
Jason Collette breaks down the players most likely to be dealt at the deadline as well as those who are set to benefit from increased playing time.
AL FAAB Factor: Waiver Pickups of the Week
130 days ago
130 days ago
Erik Siegrist looks over the slim pickings on AL waiver wires and thinks it might be a good time to stash a spec saves option like A.J. Puk.
Past Fantasy Outlooks
2022
2021
2020
Olivares broke camp with the Royals as a reserve outfielder, but playing time is likely to be scarce to begin with. The 26-year-old impressed with a .313/.397/.559 slash line in 66 games with Triple-A Omaha last season. He wasn't able to translate that success to the big leagues, where he hit .238/.291/.406 in 39 games. There's still room for him to grow, but getting a foot in the door for playing time figures to be his biggest challenge. Olivares has a good speed tool, notching at 47 steals in 193 games at the upper levels of the minors -- he'll likely be called upon as a pinch runner regularly in 2022.
Olivares made the jump from Double-A, debuting the first weekend of the 2020 season. While Olivares doubled in his first game and launched his first career home run in early August, he also struck out in 38.9% of his PA in a Padres uniform. The Padres traded Olivares in late August along with a PTBNL in exchange for Trevor Rosenthal -- not a case of San Diego souring on the outfielder as much as it was a straightforward reflection of how MLB front offices view Olivares. He has some power and good speed and is much better at making contact than he showed during his time in San Diego -- indeed his strikeout rate dropped to 16.9% following the trade -- but he's not a big walker and he's not a particularly good defender even with that speed. The Royals are suddenly pushing to compete and playing time is not assured, but Olivares will have every chance to secure a starting job in spring training.
The Padres opted to protect Olivares from the Rule 5 draft in 2018 and he rewarded that optimism by logging a 123 wRC+ with 18 home runs and 35 steals (on 45 attempts) in the Texas League. He turns 24 in March and only had a 23.0 Hard% in 2019, so there is reason for pessimism regarding his ability to hit enough to be an everyday outfielder on a team with San Diego's depth. Olivares is an above-average runner, but improved to just passable in the outfield at Double-A. He has enough arm for right field, so he is versatile enough to handle all three spots, but lacks the instincts to be a huge net positive in the field. This means his bat probably has to be at least league average. He doesn't strike out too much (17.8 K%) and hit line drives at a 25.5% clip while using the whole field. He currently trails Taylor Trammell in the pecking order, but could pass him if he keeps making improvements.
More Fantasy News