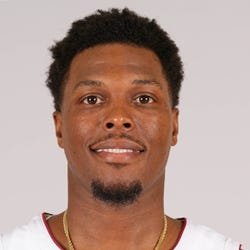 GTD
Injury Knee
Est. Return 2/8/2023
2022 Stats
PTS
12.0
REB
4.3
AST
5.3
STL
1.1
BLK
0.4
ROS Projections
PTS
REB
AST
STL
BLK
Unlock Our Projections
2022 Fantasy Outlook
After nine seasons in Toronto, Lowry signed a three-year, $85 million contract with Miami last summer. The now-36-year-old point guard saw a reduced role on the Heat, sharing more responsibilities with Jimmy Butler, Tyler Herro and Bam Adebayo. Lowry's 18.2 percent usage rate was his lowest since his third year in the NBA, and his 13.4 points per game were his fewest since 2009-10. However, his efficiency remained strong, as his 60.0 percent true shooting mark on 44/38/85 splits was the second highest of his career. Lowry also contributed 7.5 assists, 4.5 rebounds and 1.1 steals in 33.9 minutes. The result was Lowry ranking 51st in per-game fantasy production for eight-category leagues -- a solid mark but his lowest since 2012-13. His role should remain similar this season, as the Heat made few offseason changes. Another year older also puts Lowry at increased risk of injury and rest, plus general regression. As a result, fantasy managers likely won't have to pay up to the fifth round for Lowry, but he still provides a nice floor as a three-point shooter and passer. Read Past Outlooks
read more
Height 6'0"
Weight 196
DOB 3/25/1986
College Villanova
Drafted 1st Rd, #24 in 2006
$Signed a three-year, $85 million contract with the Raptors in August of 2021. Traded to the Heat in August of 2021.
Personal Bio/PreCareer Summary

Kyle Terrell Lowry was born in 1986 in Philadelphia, Pennsylvania and is the son of Marie Halloway. Kyle has one older brother, Lonnie. Lowry played high school basketball at Cardinal Dougherty High School in Philly before playing two years at Villanova. Kyle and his wife Ayahna co-founded the Lowry Love Foundation, which seeks to "touch the lives of the underprivileged and disadvantaged in order to promote their attainment of a better quality of life". Lowry was also a member of the USA national team that won a gold medal at the 2016 Summer Olympics. He enjoys golf and eating pancakes. Follow the point guard on Twitter (@Klow7) and Instagram (@kyle_lowry7). Kyle Lowry played two seasons of college ball -- the 2004-05 and 2005-06 campaigns -- at Villanova University. He mostly came off the bench as a freshman, starting three of 24 games and averaging 7.5 points, 3.2 rebounds and 2.0 assists in 23 minutes per game. At the end of the season, he was named Philadelphia Big 5 Rookie of the Year and also made the Big East All-Rookie Team. As a sophomore, he made the Big East honor roll once again and was selected to the All-Big East Second Team. During his sophomore year, Lowry started 31 of 33 games for the Wildcats, posting 11.0 points, 4.3 rebounds, 3.7 assists and 2.3 steals per game while shooting 46.6 percent from the field. Lowry's 2005-06 Villanova squad finished at 28-5 and made it to the Elite Eight of the NCAA Tournament, where they lost to Florida. The energetic point guard then declared for the 2006 NBA Draft, where he was chosen by the Memphis Grizzlies with the 24th overall pick.