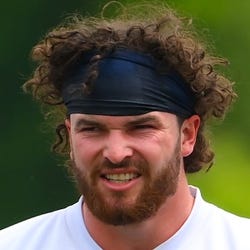 2022 Receiving Stats
REC
33
YDS
327
TD
2
AVG
9.9
TAR
42
Rest-of-Season Projections
REC
YDS
TD
AVG
TAR
Unlock Our Projections
2022 Fantasy Outlook
Knox broke out in his third NFL campaign last season, setting career highs across the board. He ranked just 20th among tight ends in targets (71) despite missing only two games, but Knox’s 19 red-zone looks tied for fourth at the position, and he tied for the league lead among tight ends with nine touchdowns. There’s little reason to think the Bills will change Knox’s role this season, even after they signed O.J. Howard, considering their approach last season produced 28.4 points per game and an AFC East crown. Knox’s red-zone chemistry with quarterback Josh Allen is apparent, but there remain plenty of mouths to feed between the 20s in an offense that likes to take advantage of Allen’s arm strength by pushing the ball downfield to Stefon Diggs and Gabriel Davis. Knox offers a nice blend of size and speed, with a 4.57 40 at 254 pounds, but given his dependence on touchdowns, he could struggle to match the consistency of some similarly regarded tight ends. That’s especially true in PPR formats, even if he has big games here and there. Read Past Outlooks
read more
RANKS
#106.51
ADP
#

TEBuffalo Bills
Read More News
NFL Stats
Loading NFL Stats...
Fantasy/Red Zone Stats
See red zone opportunities inside the 20, 10 and 5-yard lines along with the percentage of time they converted the opportunity into a touchdown.
Loading Fantasy/Red Zone Stats...
Advanced NFL Stats
How do Dawson Knox's 2022 advanced stats compare to other tight ends?
This section compares his advanced stats with players at the same position. The bar represents the player's percentile rank. For example, if the bar is halfway across, then the player falls into the 50th percentile for that metric and it would be considered average. The longer the bar, the better it is for the player.
Air Yards Per Game
30.0
Air Yards Per Snap
0.51
% Team Air Yards
9.1%
% Team Targets
11.2%
Avg Depth of Target
6.8 Yds
Catch Rate
73.8%
Drop Rate
2.4%
Avg Yds After Catch
4.2
% Targeted On Route
16.2%
Avg Yds Per Route Run
1.26
Loading Advanced NFL Stats...
2022
2021
2020
2019
2022 NFL Game Log

@ Lions
Thursday, Nov 24th at 12:30PM
Overall QB Rating Against
84.7
Cornerbacks
90.3
Safeties
76.3
Linebackers
86.6
Loading Opponent Pass Defense Stats...
2022 Dawson Knox Split Stats
Loading NFL Split Stats...
Measurables Review View College Player Page
How do Dawson Knox's measurables compare to other tight ends?
This section compares his draft workout metrics with players at the same position. The bar represents the player's percentile rank. For example, if the bar is halfway across, then the player falls into the 50th percentile for that metric and it would be considered average.
Height
6' 4"
Weight
254 lbs
Shuttle Time
4.27 sec
Cone Drill
7.12 sec
Vertical Jump
34.5 in
Bench Press
16 reps
Hand Length
9.75 in
Arm Length
33.50 in
Recent RotoWire Articles Featuring Dawson Knox
FanDuel NFL: Thanksgiving Breakdown
3 days ago
3 days ago
Dan Marcus analyzes the Thanksgiving FanDuel contest as Kirk Cousins might have value thanks to his supporting cast.
DraftKings NFL: Thanksgiving Breakdown
3 days ago
3 days ago
Ryan Belongia analyzes the DraftKings contest for Thanksgiving as Dak Prescott projects well for his salary against the Giants.
NFL DFS Picks: Yahoo Plays and Strategy for Thanksgiving Baller
3 days ago
3 days ago
Sasha Yodashkin digs into the Thanksgiving slate as Josh Allen and the Bills look to take advantage of a shaky Lions secondary.
Exploiting the Matchups: Week 12 Start/Sit and Streamers
3 days ago
3 days ago
Keenan Allen nearly breached 100 yards in his first game back and now gets a favorable matchup with Arizona. Plus, that's not the only slot matchup Jerry Donabedian likes this week.
Weekly Rankings: Week 12 Value Meter
4 days ago
4 days ago
Are Mike Evans and the Bucs back? They have a reasonably good matchup against the Browns this week.
Past Fantasy Outlooks
2021
2020
Knox was a surprise third-round pick in 2019, after wrapping up his career at Ole Miss with 39 catches for 605 yards and no touchdowns. The Bills apparently were impressed by his blocking, along with a reported 4.57-second 40-yard dash from his pro day. Two years later, Knox has started 18 of his 27 games, typically playing about 60 percent of offensive snaps when healthy. However, he's made more than his fair share of mistakes, including 10 drops on 50 targets as a rookie, followed by two fumbles (and four drops) on just 24 catches in 2020. While QB Josh Allen has elevated Buffalo's wide receivers, the team hasn’t gotten much from its tight ends in recent years. There was no big offseason addition to correct that problem, though it is possible Jacob Hollister takes snaps from Knox, particularly on passing downs. On the other hand, Knox still has a degree of breakout appeal, given his size/speed combo and likely starting role in a high-powered offense.
A third-round pick last year, Knox was second among rookie tight ends in snaps (659) and third in targets, waltzing his way to a starting job after Tyler Kroft suffered a broken foot in OTAs. The Ole Miss product finished his college career with 605 yards and nary a touchdown, struggling to find targets behind A.J. Brown and DK Metcalf. Knox's impressive pro day (4.57 40), 254-pound frame and reputation for strong blocking inspired the Bills to take a shot, and while the rookie perhaps held his own as a starter, the lack of polish was evident (14.3 percent drop rate). He did at least show some big-play ability with five catches for 160 yards on 11 targets traveling 20plus yards downfield. The Bills didn't bring in serious competition, and Knox figures to enter this season atop the depth chart, potentially even handling a three-down role. In terms of targets, he'll presumably fall in somewhere behind Stefon Diggs and John Brown, and possibly behind Cole Beasley and Devin Singletary.
More Fantasy News