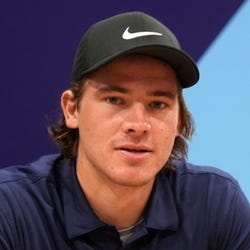 Questionable
Injury Ribs
Est. Return 10/2/2022
Wed Practice: Limited
2022 Pass/Rush Stats
YDS
910
TD
7
INT
2
YDS
9
TD
0
Rest-of-Season Projections
YDS
TD
INT
YDS
TD
Unlock Our Projections
2022 Fantasy Outlook
Herbert followed his record-setting rookie year with another season of prolific numbers last year. He became the only player in NFL history with 30-plus touchdown passes in each of his first two years, setting records for most TD passes, passing yards and 300-yards games in a player’s first two seasons. Herbert even finished QB2 in fantasy, with at least 300 yards or three TD passes in 12 games en route to ranking third in touchdowns (38) and second in yards (5,014). His passing efficiency last season was similar to his impressive first year, up a tick or two in a few places like YPA, on-target percentage and average target depth. And he was again effective throwing downfield, ranking third in on-target rate on attempts of 20-plus yards (min. 50 attempts). Herbert did all that after learning his second offense in as many years with the arrival of a new coaching staff. With head coach Brandon Staley and offensive coordinator Joe Lombardi returning, stability figures to help Herbert in his third year. A bigger help is the return of wide receivers Keenan Allen and Mike Williams and running back Austin Ekeler. The Chargers added TE Gerald Everett to replace Jared Cook, then drafted RG Zion Johnson in the first round to improve their offensive line. Herbert has a strong roster around him, and he's yet to really tap into his running ability, which gives him additional upside on top of his continued growth as a passer. Read Past Outlooks
read more
RANKS
#43.28
ADP
#

QBLos Angeles Chargers
Read More News
NFL Stats
Loading NFL Stats...
Fantasy/Red Zone Stats
See red zone opportunities inside the 20, 10 and 5-yard lines along with the percentage of time they converted the opportunity into a touchdown.
Loading Fantasy/Red Zone Stats...
Advanced NFL Stats
How do Justin Herbert's 2022 advanced stats compare to other quarterbacks?
This section compares his advanced stats with players at the same position. The bar represents the player's percentile rank. For example, if the bar is halfway across, then the player falls into the 50th percentile for that metric and it would be considered average. The longer the bar, the better it is for the player.
Bad Pass %
18.9%
Avg Target Depth
6.5 Yds
Sack Rate
2.3%
Avg Receiver YAC
5.7 Yds
Receiver Drop %
3.1%
Loading Advanced NFL Stats...
2022
2021
2020
2022 NFL Game Log

Chargers
View Full Depth Chart
This Week's Opposing Pass Defense
How does the Texans pass defense compare to other NFL teams this season?
The bars represents the team's percentile rank (based on QB Rating Against). The longer the bar, the better their pass defense is. The team and position group ratings only include players that are currently on the roster and not on injured reserve. The list of players in the table only includes defenders with at least 3 attempts against them.

@ Texans
Sunday, Oct 2nd at 1:00PM
Overall QB Rating Against
52.7
Cornerbacks
57.2
Safeties
41.7
Linebackers
79.1
Loading Opponent Pass Defense Stats...
2022 Justin Herbert Split Stats
Loading NFL Split Stats...
Measurables Review View College Player Page
How do Justin Herbert's measurables compare to other quarterbacks?
This section compares his draft workout metrics with players at the same position. The bar represents the player's percentile rank. For example, if the bar is halfway across, then the player falls into the 50th percentile for that metric and it would be considered average.
Height
6' 6"
Weight
236 lbs
40-Yard Dash
4.68 sec
Shuttle Time
4.46 sec
Cone Drill
7.06 sec
Vertical Jump
35.5 in
Broad Jump
123 in
Hand Length
10.00 in
Arm Length
32.88 in
Recent RotoWire Articles Featuring Justin Herbert
NFL Week 4 Picks, Predictions, Props and Best Bets for Every Game
Today
Today
John McKechnie breaks down the NFL betting odds for every game on the Week 4 slate and gives his picks on the spreads and totals.
Beating the Book: Packers Dominate, Vikings Win in London + Full Week 4 Picks
Yesterday
Yesterday
Nick Whalen analyzes all 16 games in Week 4 and offers up his final score predictions and picks against the spread.
Survivor: Week 4 Strategy & Picks
Yesterday
Yesterday
Jason Thornbury likes the Eagles in Week 4 Survivor as it could be wise to fade the overwhelming-favorite Packers.
Weekly Rankings: Week 4 Value Meter
Yesterday
Yesterday
A.J. Brown finally converted his volume into a score last week.
Target Breakdown: Snaps, Routes, Targets & Air Yards through Week 3
2 days ago
2 days ago
Jerry Donabedian tests out a new format in Target Breakdown, ahead of what should be a busy week on waiver wires.
Past Fantasy Outlooks
2021
2020
It took an errant needle poke to Tyrod Taylor's lung to get Herbert his first start last season in Week 2, but he quickly showed he should have been the starter all along. The sixth overall pick in the 2020 draft, Herbert set numerous NFL rookie records, including most TD passes (31) and most passing yards per game (289.1). He became the youngest player in NFL history with 30 TD passes in a season and was the fourth rookie with 4,000 passing yards. Scouts questioned his touch on deep balls coming out of Oregon, but Herbert had few issues capitalizing with his cannon arm, connecting for 10 TD passes on attempts 20-plus yards (3rd) and completing eight passes that went for at least 50 yards (T-1st). He was also good under pressure, completing 54.9 percent of his attempts with an on-target rate of 63.4 percent, both third in the league. And his 4.68 speed added fantasy value as he rushed for five touchdowns (T-6th). Part of Herbert's work last year was the result of volume (39.7 attempts per game, 3rd), as his bad-pass percentage ranked 26th (20.2) and his average target depth was 25th (7.8 yards). But new offensive coordinator Joe Lombardi, who ran a pass-happy offense in Detroit in 2014-15 before serving as Saints QB coach the last five years, could help Herbert improve in those areas without sacrificing too much volume. And Herbert still has quality weapons in Austin Ekeler, Keenan Allen, Mike Williams and former Saints TE Jared Cook. The Chargers also upgraded the offensive line, signing All-Pro center Corey Linsley and left guard Matt Feiler and drafting left tackle Rashawn Slater 13th overall. Herbert, who finished QB9 last season, easily could jump into the top 5 of fantasy QBs this year.
Herbert, the third quarterback drafted this year at sixth overall, looks like the ideal NFL QB at 6-6, 236, with plus athleticism and 4.68 speed in the 40. But he has some issues to overcome before the Chargers crown him heir apparent to Philip Rivers. Herbert has a rifle for an arm to attack downfield but, according to scouts, lacks touch on his deep ball, and his footwork and mechanics are apt to break down under pressure. Despite being a four-year starter at Oregon, Herbert was noted for his inconsistency - even as senior. In his final four games, he stumbled to 58.9 percent passing with four TDs, three INTs and 202 yards per game. And while his timed speed was third fastest among quarterbacks at the combine, Herbert seemed to reluctant to tuck it and run as a collegian. He also needs to adapt to an NFL route tree after playing in Oregon's limited offensive scheme, though that shouldn't be too high a hurdle for the winner of last year's "Academic Heisman." Plus, with Tyrod Taylor entering camp as the starter, Herbert has time to develop his game before likely taking the reins later in the year. When he does, he'll have an improved offensive line protecting him with Mike Pouncey returning from injury, joined by the newly acquired Trai Turner and Bryan Bulaga. He also has excellent weapons to target, including Keenan Allen and Austin Ekeler. Herbert might not be NFL-ready when the season opens, but time is on his side.
More Fantasy News