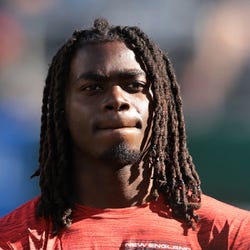 2022 Rush/Rec Stats
ATT
161
YDS
734
TD
4
YDS
383
TD
1
Rest-of-Season Projections
ATT
YDS
TD
YDS
TD
Unlock Our Projections
2022 Fantasy Outlook
Rookie running backs can have a tough time getting going in New England. Stevenson was no exception after being taken in the fourth round in 2021, playing only four snaps through the first three weeks of the season and not taking on a significant role in the offense until Week 9, when he piled up 106 total yards on 12 touches against the Panthers. He followed that up with 100 rushing yards and two touchdowns against the Browns, and from that point on the backfield was essentially a timeshare between Stevenson and Damien Harris, with each taking their turn in the spotlight. Stevenson is the bigger back of the two, and he broke 16 tackles last year on 133 carries - the second-best rate in the NFL behind only fellow rookie Javonte Williams. Despite the impressive pro debut, Stevenson's outlook for 2022 is murky. Harris is still under contract for another year, Ty Montgomery is trying to earn a role on passing downs and the Patriots added two rookie backs on Day 3 of the draft. That leaves Stevenson in a likely committee role again, with Harris the biggest obstacle short term. Read Past Outlooks
read more
RANKS
#90.48
ADP
#

RBNew England Patriots
Read More News
NFL Stats
Loading NFL Stats...
Fantasy/Red Zone Stats
See red zone opportunities inside the 20, 10 and 5-yard lines along with the percentage of time they converted the opportunity into a touchdown.
Loading Fantasy/Red Zone Stats...
Advanced NFL Stats
How do Rhamondre Stevenson's 2022 advanced stats compare to other running backs?
This section compares his advanced stats with players at the same position. The bar represents the player's percentile rank. For example, if the bar is halfway across, then the player falls into the 50th percentile for that metric and it would be considered average. The longer the bar, the better it is for the player.
Broken Tackle %
15.5%
Positive Run %
78.9%
% Yds After Contact
71.0%
Avg Yds After Contact
3.2
Rushing TD %
2.5%
Touches Per Game
18.1
% Snaps w/Touch
43.5%
Air Yards Per Game
-3.1
Air Yards Per Snap
-0.07
% Team Air Yards
-1.5%
% Team Targets
19.3%
Avg Depth of Target
-0.5 Yds
Catch Rate
83.6%
Drop Rate
4.5%
Avg Yds After Catch
8.1
% Targeted On Route
25.5%
Avg Yds Per Route Run
1.46
Loading Advanced NFL Stats...
2022
2021
2022 NFL Game Log

vs Bills
Thursday, Dec 1st at 8:15PM
Overall QB Rating Against
72.8
Cornerbacks
78.6
Safeties
76.9
Linebackers
61.8
Loading Opponent Pass Defense Stats...
2022 Rhamondre Stevenson Split Stats
Loading NFL Split Stats...
Measurables Review View College Player Page
How do Rhamondre Stevenson's measurables compare to other running backs?
This section compares his draft workout metrics with players at the same position. The bar represents the player's percentile rank. For example, if the bar is halfway across, then the player falls into the 50th percentile for that metric and it would be considered average.
* All metrics are from his Pro Day (not the combine).
Height
6' 0"
Weight
225 lbs
40-Yard Dash
4.63 sec
Shuttle Time
4.15 sec
Cone Drill
7.09 sec
Vertical Jump
31.5 in
Broad Jump
112 in
Bench Press
15 reps
Hand Length
8.75 in
Arm Length
30.25 in
Recent RotoWire Articles Featuring Rhamondre Stevenson
Thursday Night Football Best Bets: NFL Picks and Player Props for New England Patriots vs. Buffalo Bills
3 days ago
3 days ago
Mike Barner digs into the betting odds for Thursday's AFC East clash between the Bills and Patriots and offers his best bets and props to target.
Monkey Knife Fight: Thursday Night Football Picks
3 days ago
3 days ago
Mike Barner analyzes the Thursday night Monkey Knife Fight DFS contests. Take the under on Rhamondre Stevenson's projected rushing yards.
NFL Game Previews: Saints-Buccaneers Matchup
3 days ago
3 days ago
Erik Siegrist analyzes the Monday night matchup as Tom Brady and the Bucs take on the Saints in a key NFC South showdown.
Thursday Night Football DFS Breakdown: New England vs. Buffalo
3 days ago
3 days ago
With no Damien Harris available Rhamondre Stevenson might need to play upwards of 60 snaps Thursday.
Weekly Rankings: Week 13 Value Meter
5 days ago
5 days ago
Deshaun Watson makes his Browns debut this week.
2021 Fantasy Outlook
Stevenson, who the Patriots list at 6-foot, 227 pounds, was taken by the team in the fourth round of the 2021 NFL Draft and since then has opened eyes with his preseason efforts. Though the Patriots have in the past tended to ease rookie backs into the equation, Stevenson figures to mix in on early downs behind top option Damien Harris, after the Patriots traded Sony Michel to the Rams in late August. That leaves Stevenson one injury (or benching) away from steady carries. Also in the team's backfield mix are change-of-pace back James White, 5-foot-6, 185-pounder J.J. Taylor and special teams ace Brandon Bolden. While Stevenson's immediate path to fantasy lineup utility is currently muddled, the Oklahoma product is well worth a late-round flyer/auction end-game bid, given that his profile in New England's offense could grow as the 2021 season progresses.
More Fantasy News