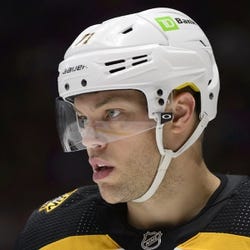 2022 Stats
G
9
A
8
PP Pts
4
+/-
4
PIM
12
ROS Projections
G
A
PP Pts
+/-
PIM
Unlock Our Projections
2022 Fantasy Outlook
Hall's first full season with the Bruins was solid, if unspectacular. He finished the year with 20 goals and 61 points in 80 games. They are perfectly reasonable numbers, but a far cry from the 39 goals and 93 points we saw from Hall when he won the Hart Trophy in 2017-18 with New Jersey. Hall has never scored at that level before or since, so it would be foolish to expect a massive bump in Hall's numbers moving forward. Hall is still a mid-round fantasy option given his role on a decent club, but don't overpay on draft day. Read Past Outlooks
read more
#