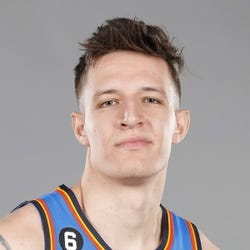 Vit Krejci was born on June 19, 2000 in Strakonice, in the Czech Republic. Strakonice is a busy manufacturing town based at the merger of the Volynka and Otava rivers in the South Bohemian region. His father, also named Vit Krejci, played basketball locally in Strakonice while his older sister Jolana Krejcova played for the Czech Republic's youth teams. As a youngster, Krejci played basketball for the nearby youth academy of Sokol Pisek. At the age of 14, Krejci joined the roster of Zaragoza, a Spanish basketball club, and moved with his mother to Spain. During the 2016-17 season, he started playing for Zaragoza's reserve team, Anagan Olivar, in the Liga EBA, the fourth tier league in the national Spanish basketball system. In March of 2017, at the age of 16, Krejci made is professional debut with Zaragoza. During the 2019-20 season, while playing in Spain's top tier Liga ACB, Krejci averaged 3.2 points in 9.2 minutes per game and was named to the ACB All-Young Players Team. Krejci also represented the Czech Republic as a member of the Under-20 team and debuted for the senior national team at the 2019 FIBA World Cup qualification stage. In April of 2020, Krejci declared himself eligible for the 2020 NBA Draft. Later in September, against Real Madrid, he suffered a left knee injury that cut short his Liga ACB 2020-21 season. In November of 2020, he was drafted by the Oklahoma City Thunder. Krejci made his professional debut at age 16, appearing for Zaragoza in a matchup against Fuenlabrada. Krejci became the second-youngest player to ever debut for the club, behind only Carlos Alcocen. Krejci played only sparingly during the 2016-17 season, as well as the 2018-19 campaign. However, in 2019-20, Krejci made 23 appearances for Zaragoza in the ACB league, averaging 3.7 points, 1.2 rebounds and 0.7 assists in 9.1 minutes. Krejci appeared in FIBA Junior Team events in 2015, 2016, 2017, 2018 and 2019. In the U20 Euro Championships (B) in 2019, Krejci averaged 14.9 points, 5.1 assists, 1.6 steals and 1.1 blocks en route to an All-Tournament Team selection.