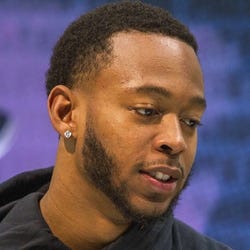 Inactive
Injury Knee
Est. Return 10/2/2022
Fri Practice: Limited
2022 Receiving Stats
REC
13
YDS
150
TD
0
AVG
11.5
TAR
19
Rest-of-Season Projections
REC
YDS
TD
AVG
TAR
Unlock Our Projections
2022 Fantasy Outlook
Meyers finally scored his first TD Week 10 last year, and within a few weeks he'd reached career highs in every other major counting stat, albeit with career lows for yards per catch and yards per target. Rookie QB Mac Jones played better than Cam Newton the year before, and Meyers was probably lucky in the first place to post 9.0 YPT and a 72.8 percent catch rate in a Newton-led offense. The most likely scenario for 2022 is Meyers recovering some of the efficiency but failing to match last year's 126 targets. That's partly because the team has a more experienced version of Jones in Year 2, and partly on account of a more diverse passing game with DeVante Parker and second-round pick Tyquan Thornton added at WR. The improved depth likely will cost Meyers snaps and targets on the perimeter, which accounted for about a third of his volume, but he'll still be the primary slot man and one of Jones' most trusted receivers. Read Past Outlooks
read more
RANKS
#140.57
ADP
#

WRNew England Patriots
Read More News
NFL Stats
Loading NFL Stats...
Fantasy/Red Zone Stats
See red zone opportunities inside the 20, 10 and 5-yard lines along with the percentage of time they converted the opportunity into a touchdown.
Loading Fantasy/Red Zone Stats...
Advanced NFL Stats
How do Jakobi Meyers' 2022 advanced stats compare to other wide receivers?
This section compares his advanced stats with players at the same position. The bar represents the player's percentile rank. For example, if the bar is halfway across, then the player falls into the 50th percentile for that metric and it would be considered average. The longer the bar, the better it is for the player.
Air Yards Per Game
100.0
Air Yards Per Snap
1.96
% Team Air Yards
35.5%
% Team Targets
29.7%
Avg Depth of Target
10.5 Yds
Catch Rate
68.4%
Drop Rate
10.5%
Avg Yds After Catch
1.7
% Targeted On Route
30.6%
Avg Yds Per Route Run
2.42
Loading Advanced NFL Stats...
2022
2021
2020
2019
2022 NFL Game Log

vs Ravens
Sunday, Sep 25th at 1:00PM
Overall QB Rating Against
99.6
Cornerbacks
120.7
Safeties
80.7
Linebackers
91.8
Loading Opponent Pass Defense Stats...
2022 Jakobi Meyers Split Stats
Loading NFL Split Stats...
Measurables Review View College Player Page
How do Jakobi Meyers' measurables compare to other wide receivers?
This section compares his draft workout metrics with players at the same position. The bar represents the player's percentile rank. For example, if the bar is halfway across, then the player falls into the 50th percentile for that metric and it would be considered average.
Height
6' 2"
Weight
200 lbs
40-Yard Dash
4.63 sec
Shuttle Time
4.23 sec
Cone Drill
7.07 sec
Vertical Jump
37.0 in
Broad Jump
118 in
Bench Press
13 reps
Hand Length
9.50 in
Arm Length
32.00 in
Recent RotoWire Articles Featuring Jakobi Meyers
Gameday Injuries: Week 3
Yesterday
Yesterday
Juan Carlos Blanco breaks down the latest as of early Sunday morning on another robust NFL injury landscape in Week 3.
Week 3 Friday Injury Report: Kittle Cleared, Herbert Questionable, Bills Defense Depleted
3 days ago
3 days ago
A lot of star players are listed as questionable this week, but George Kittle isn't one of them.
Wide Receivers vs. Cornerbacks: Week 3 Matchups
3 days ago
3 days ago
Mario Puig analyzes the wide receiver-cornerback matchups for Week 3. Allen Robinson is poised to finally break out after a slow two-week start to his Rams career.
Exploiting the Matchups: Week 3 Start/Sit and Streamers
4 days ago
4 days ago
Jerry Donabedian thinks Drake London will have the best Week 3 of any rookie receiver.
NFL Game Previews: Cowboys-Giants Matchup
4 days ago
4 days ago
Erik Siegrist analyzes the Monday night matchup as Daniel Jones leads the Giants against the Cowboys.
Past Fantasy Outlooks
2021
2020
2019
Meyers figures to compete with newcomer Kendrick Bourne for a starting spot this coming season. It's assumed that free-agent acquisition Nelson Agholor will be a part of the first-team offense, but following the retirement of Julian Edelman, the rest of the Patriots' wide receiver depth chart remains unsettled. Though it's clear that the team sees something in Bourne, Meyers led the Pats last season with 59 catches for 729 yards in 14 games. Meanwhile, 2019 first-rounder N'Keal Harry also is in the mix, but his role is undefined. In that context, Meyers still has an opportunity to carve out a niche in what should be an improved passing attack in 2021, but with the Patriots likely to run plenty and feature two-tight end sets, earning steady volume figures to be an issue for any of the team's wideouts.
Meyers, who joined the Patriots as an undrafted free agent, beat the odds and stuck around with the team last year. He even managed to log a few PPR-worthy efforts in the process, while finishing the regular season with 26 catches for 359 yards in 15 games. Heading into the 2020 campaign, the 6-2, 200-pounder may have to fight to keep his slot in New England's wide receiver rotation behind Julian Edelman, given that N'Keal Harry will be healthy out of the gate and Damiere Byrd was added in free agency.
With N'Keal Harry on IR, Meyers is sticking around as a depth option behind Julian Edelman, Josh Gordon, Demaryius Thomas and Phillip Dorsett. Making the team was a feat for the undrafted free agent, but additional roster attrition would have to occur in order for Meyers to merit fantasy consideration.
More Fantasy News