This article is part of our NFL Draft series.

The first round of this year's NFL Draft is in the books and there's plenty to discuss. As we expected, almost all of the fantasy intrigue from Thursday came from the receivers as six wideouts came off the board in the first 18 picks. The only other fantasy-relevant player taken was quarterback Kenny Pickett, who will likely spend the year backing up Mitchell Trubisky in some familiar surroundings.

In all, it's a fun group of receivers and I'm here to break down who they are as prospects and who they can become as rookies now that their landing spots have been determined.

The Falcons may not be doing the best job with their roster build, but for fantasy, this was always going to be a great landing spot if they were going to take a receiver in the first. Outside of Kyle Pitts, the Falcons did not have a viable starting NFL pass-catcher before tonight, and now they do. So that's a start.

So what does London bring to the table? He's a big, athletic wideout at 6-foot-4 and 219 pounds with 33-inch arms, which gives Atlanta two options who can play above the rim when it gets to the red zone. An ankle injury prevented London from testing at the combine or at his pro day, so Atlanta had to have determined that his production and film were enough to warrant taking him at No.8. And they may be right. Being the college football junkie that I am, I watched an awful USC team every week this fall just for London. Teams knew the ball was going his way and they couldn't do anything about it.

Through Week 9, when he suffered the ankle injury, London led the nation in targets (124) and had a whopping 38% target share in the Trojan offense. Despite carrying the passing volume, London still had a YPT of 8.7 while USC averaged 7.2 YPA as a team. That's stunning.

To summarize, no other rookie receiver has a clearer path to a huge role in an offense than London. I'm sold on his ability; he's a big-bodied receiver with a basketball background who showed an ability from his freshman season that he can not only handle a high-volume role but excel in it. If Marcus Mariota can cobble together a decent season, London should have what he needs to be the top-producing rookie receiver.

I figured Jameson Williams would be the pick for the Jets here, but the Jets may not have expected Wilson to be there at 10, either. Regardless, Wilson is now a Jet, so let's unpack what that means for this year.

Wilson was a five-star recruit out of Texas who developed into the alpha dog of one of the best college receiving corps in recent memory. Five of his 30 catches as a true freshman went for touchdowns. He continued to improve and that culminated in him torching defenses for 70 grabs, 1,058 yards and 12 touchdowns as a junior.

Wilson doesn't have the prototypical frame of a No.1 wideout at 5-foot-11, 183 pounds, but everything else about his game suggests that he can be just that. He's dangerous after the catch (4.38 in the 40) and has impressive body control on top of it.

Wilson's addition will likely push Elijah Moore to the slot full-time and gives the Jets a receiving corps with some serious juice to it. There are a couple of things working against Wilson being a fantasy starter every week, though. The competition for targets will be fierce alongside Moore and Corey Davis. There's also the question of whether Zach Wilson can take a step forward after a rocky rookie season because if he's busy throwing picks or getting sacked, it won't matter how badly Wilson is beating corners off the line.

I'm in on Wilson as a legitimate fantasy option down the line but competition for targets and a shaky quarterback situation will likely propel other rookies ahead of him this year.

Olave and the Saints just made too much sense not to happen. Michael Thomas coming back or not, New Orleans needed a receiver with one of its two first-round selections. And the Saints even traded up to make sure they got their guy.

Olave caught an Ohio State record 35 touchdowns during his time in Columbus, including 13 as a senior. When Olave was a freshman, he found his way onto the field late in the season and caught three touchdowns despite playing alongside a senior-laden group that would turn out six future NFL receivers, including Terry McLaurin. Olave was so smooth on film that it made you almost forget how athletic he is; he proved at the combine that he's not merely a technician with a strong 4.39-second 40 at 6-foot and 187 pounds.

New Orleans is turning the page on offense with Sean Payton gone. Even if Michael Thomas is close to his previous form, this projects to be a much more balanced offense in terms of target distribution. Put another way, Thomas can be a high-volume receiver once again without being force-fed the way he was while playing alongside late-career Drew Brees. There will still be room for Olave to be an immediate contributor. Olave is a more athletic player than Thomas who can make plays downfield. New Orleans may not have the best quarterback situation, but it's enough to support multiple receivers from a fantasy standpoint. I'll take Olave over Wilson in redraft this summer and not lose any sleep over it.

Sigh. This one was a head-scratcher. There isn't a more exciting receiver in this class than Williams – his big-play ability is unmatched – and he gets paired up with one of the most conservative, milquetoast passers in the league.

Of the quarterbacks who attempted 330 or more passes last season, no one had a lower average depth of throw than Goff at 6.8. Maybe you can blame that on Detroit's lack of weapons in the passing game, but his aDOT was 6.4 in his final year in Los Angeles. This is who he is, and that's a problem for Williams in 2021.

Amon-Ra St. Brown and T.J. Hockenson are going to demand a lot of targets in the short and intermediate passing game, and we know that's where Goff will be looking most of the time. I fear that Williams will be little more than a decoy as long as Goff is his quarterback.

Jared Goff isn't going to be in Detroit forever, so keep your head up if you've already got some dynasty shares of Williams. But for 2021, it's a tough sell.

Anyway here's a cool picture of Williams, Chris Olave and Garrett Wilson from 2020 before Williams became a force at Alabama. Neat! 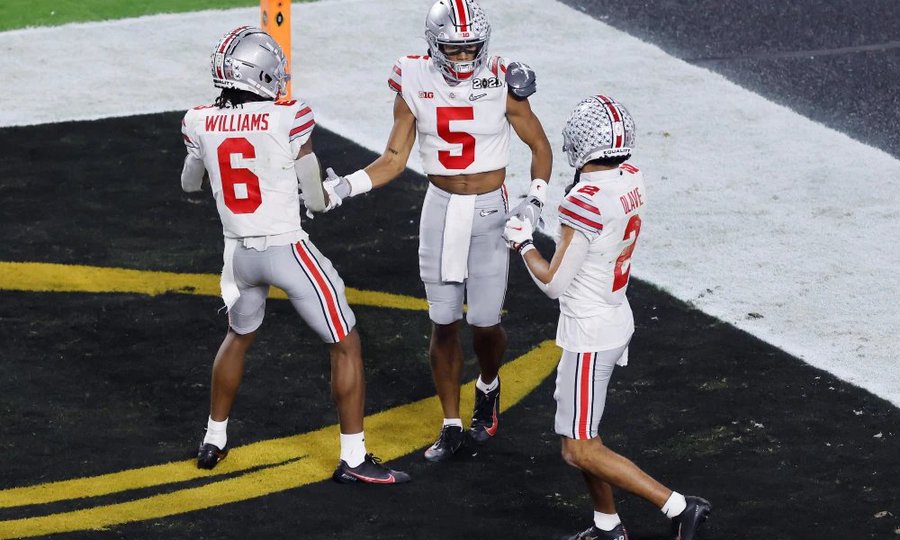 Receiver was always in play for the Commanders in the first even after they moved down to 16. That move down proved costly, though, as Washington could have had either Olave or Williams if it stuck at 11. Don't get me wrong, I like the Dotson pick in a vacuum. He's on the smaller side at 178 pounds but he dominated at Penn State despite being saddled with bad quarterback play. I just don't like moving back five spots for a light return, and that compounds when you consider the receivers the Commanders missed out on.

As for Dotson's rookie year projection, here's a good start.

Terry McLaurin played 364 of his 1,000 snaps from the slot last year, so maybe he sticks outside more often while Dotson takes more of the underneath work. Either way, there isn't much standing in the way of Dotson making a rookie impact. Who knows what Curtis Samuel still has left and Logan Thomas has his own durability concerns. 2021 rookie Dyami Brown can take another step forward but he has more of a downfield skill set, so there's a path to PPR relevance for Dotson from the jump.

Just as we all drew it up. Who didn't see Tennessee shipping A.J. Brown to Philly, moving up to 18 and snagging Burks?

This one is hard to process. Losing A.J. Brown completely changes the shape of this passing offense, which was already on thin ice with an aging and erratic Ryan Tannehill at the helm. Fair or not, the pressure is on Burks to produce right away. That's not great when Burks is far from a finished product.

Burks is raw and played the bulk of his snaps at Arkansas out of the slot (529 of 717 snaps there in 2021, per PFF) as the Razorbacks smartly took advantage of the physical mismatch he presented to nickel corners to fuel their passing game. With Robert Woods in Tennessee, Burks is going to have to learn how to play on the outside. I don't doubt that Burks has the tools to make that happen at some point – he's 6-foot-2, 225 pounds with long arms and impressive film – but it will be a process. It's also troubling that Burks has below-average long speed with a 4.55-second 40-yard dash as he'll need that more if he's playing along the boundary.

At the very least, Burks should get the opportunity to learn on the job. Brown's departure leaves 20 percent of the team's targets up for grabs, and with Robert Woods coming off an ACL tear and little else there in the Tennessee receiver room, Burks should be pressed into a role right away. Can Burks handle it, or will the learning curve be too steep and we end up seeing a lot of Nick Westbrook-Ikhine, Dez Fitzpatrick and Racey McMath on what ends up being a bad Titans team?

I want to be in on Burks – the upside is there – but his projected role means that his warts as a prospect are going to be on full display. I'll let the Burks superfans in my drafts take the plunge on him instead.

I don't have much to add to the Kenny Pickett discourse. It's cool that he's staying in Pittsburgh. I've heard about his hands. He'll probably spend the year developing while Mitchell Trubisky serves as the Steelers' bridge quarterback.

I was surprised that Malik Willis wasn't the pick if Pittsburgh was going after a quarterback, but after 32 picks passed without Willis hearing his name called, maybe I shouldn't have been.

Pickett largely struggled for four seasons at Pitt (39:25 TD:INT) before putting it together as a senior when he threw 42 touchdowns and led the Panthers to an ACC Title. Was that a function of him having the age/experience edge over the competition – not to mention the Biletnikoff Award-winning receiver on his team – or did he really turn a corner? I lean with the former.

Anyway, Trubisky will start for the Steelers and will hold onto the job until he doesn't. Pickett might be a serviceable waiver wire pickup at some point this season but that's about it.

@johns_tailgate
John is the 2016 and 2021 FSWA College Writer of the Year winner. He is a Maryland native and graduate of the University of Georgia. He's been writing for RotoWire since 2014.
Taxi Squad Stashes: Dynasty Rookies (Video)
Polarizing Players: Dalton Schultz
NFL: Rookies That Will Ruin Your Fantasy Team (Video)
NFL Schedule Release: NFL Odds, Picks, and Predictions for Week 1
NFL Schedule Release: Best Matchups, Most Anticipated Games of 2022
Polarizing Player: Courtland Sutton